Turf & surf at the Estero Americano 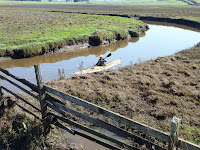 Surrounded by pastures in rural Sonoma County, it sure didn’t seem like a paddle to the Pacific Ocean. After making our way down a narrow lane that ended at a small bridge, we launched off a muddy bank into what looked like an oversized ditch. Could this funky waterway lead to a major North Coast estuary – Estero Americano – and on to the sea?


But sure enough, only a couple of hours later, some of our paddlers were catching waves while others enjoyed spectacular ocean vistas from a secluded beach, with clear views of Bodega Bay to the north and Tomales Point on the south. And the journey was as good as the destination. 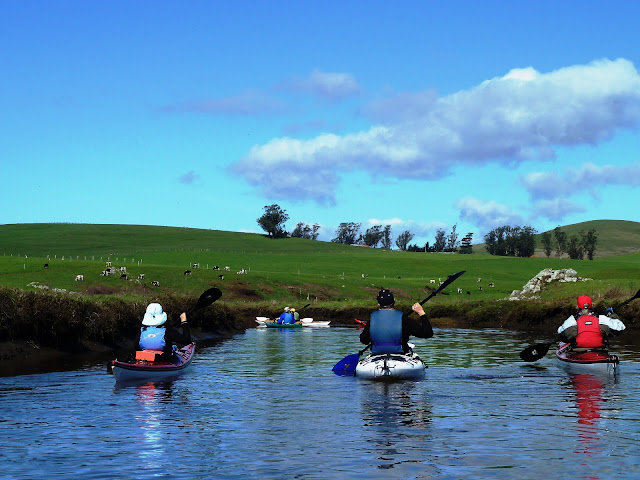 At first, we meandered through farmland with some beefy escorts. (Click to expand video screen. And if you don’t think cows understand people, note the stare when someone mentions In-N-Out Burger at the end of the video…)


We paddled onward as the muddy Americano Creek widened into the Estero Americano, and then enjoyed aerial shows by red-tailed hawks and snowy white egrets. 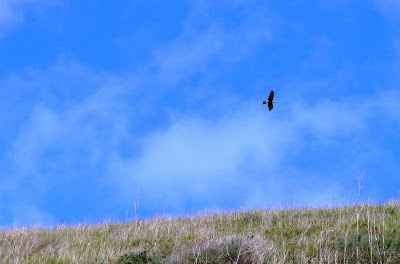 This February 20 paddle featured an unusually high tide – close to six feet at flood stage – that essentially made the 12-mile round trip possible. Even with the benefit of a high tide, our paddles often came up dripping gunk from the muddy bottom only a foot or two below the surface. Gradually, the lush hillsides rose some 500 feet or more, as we reached a lagoon and sandbar that buffered us from the surf and open sea just a few yards beyond. Spectacular!

For more than a decade, a 127-acre section of Estero Americano has been part of the Sonoma Land Trust. The ecological diversity of the area is amazing and has been well-documented. Find more sources online about the flora  of the estero, as well as efforts to preserve fragile species in an area long used for cattle farming and efforts to prevent environmental harm from farm water runoff.

Aside from water quality, the challenge for kayakers is water quantity. Flows are scant in summer. Even in winter months, the water can become dicey at low tide. Both sides of the estuary feature steep hills, no trespassing signs, no public roads, and on this day, no shelter from an approaching storm front. And the “open water” we had paddled on the way down had turned into grassy marshes teeming with shorebirds.
So as the tide began rushing back into the sea, it didn’t take much prompting for us to start back. 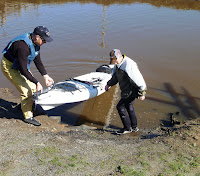 While this is a truly gorgeous place to kayak, it’s not for the casual or unwary paddler. First there was the launch down a slippery slope. If you’re in a plastic yak, stumps and rocks may be of no concern, but many of us brought gel-coated boats. Without the assistance of our Cap’n Bob (guy on the right), most of us probably would have flipped our yaks into the stinky soup. (Think carwash drain, but with cows.)

Then there was the matter of making our way through the estuary without getting stuck in the muck. NorCal Yak pals John and Rick, from a Suisun City kayak club, took care of us there. But on the way back, three or four boats briefly ran aground on the mudflats near the Whale Tail, a whimsical rock formation at about the three-mile mark. It could have been worse if John had not been there to direct us through the channel. He said he’s paddled the Estero more than ten times, but with each tide it’s always different.

We were also fortunate to have a breeze at our backs on the return trip, countering the ebb tide and creek flow. At times, we held our paddles up and could feel a boost from the wind hitting the blades. According to my GPS, we hit 5-plus mph on a part of the return leg, but it was still a strenuous haul.

Estero Americano is often compared to Elkhorn Slough in Monterey County, and there are similarities. But the Estero has its own personality, from winter green hillsides dotted with black-and-white bovines to the amazing variety of birds that call the estuary home. More than 50 different species have been identified in environmental surveys.

Plus, as one of paddler noted, kayaking Estero Americano means getting to brag that “I’ve paddled all the way to the Pacific Ocean.”

Unless you’re familiar with tidal waters and confident in your ability to navigate them, it might be wise to take your first Estero Americano paddle with someone who’s done it before. Thanks to John and Rick, and a strong assist from Fred, with Northern California-Suisun City, a Meetup club.

To help plan a trip, you could use the calculator at Saltwatertides. There’s no entry here for Estero Americano, but using the high tide data for Bodega Bay Harbor (a few miles north) and Tomales Bay entrance (south) should get you close.

The launch point is just a couple of minutes’ drive off Highway 1 in the Sonoma County village of Valley Ford. And it’s just a minute or two drive from Dinucci’s Restaurant, a classic Italian joint and a good place to load some carbs after a long paddle.
Posted by Glenn Brank at 9:52 PM