(2012 update: The Discovery Channel celebrates its 25th anniversary "Shark Week" beginning Aug. 12 with a shark cam and more. NorCal Yak sinks its teeth into the topic with a post on how to look tasty to a shark.)


Whenever a conversation turns to kayaking, the first two questions people ask me are: (1) Have you ever been stuck upside down when your kayak flipped? (2) Have you ever seen a shark while kayaking? My answers: Not yet, but if it happens, with my luck I’ll be nose-to-nose with one.


Which brings us to the Discovery TV Channel’s annual "Shark Week." My guess is that this programming draws viewers the way that Jaws was attracted to New England beaches, which also explains why Discovery brings it back every summer. (Discovery promo photo below.)ea kayak, California coast, shark attacks, kayak paddling guide 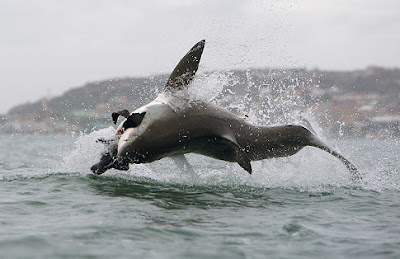 Of course, Discovery is pretty good on facts, as TV goes. And this week, there will be lots of references to the fact that, statistically speaking, humans are rarely attacked by sharks. That disclaimer will be repeated during shows with titles like “Ultimate Air Jaws”, “Into the Shark Bite”, and “Shark Attack Survival Guide,” wherein people will tell harrowing stories of survival, if they’re lucky.
Since we have nothing to fear except large dorsal fins themselves, just what is the situation for Northern California kayakers, shark-wise? Let’s start with some good news – kayakers are not the most likely human victims of a shark attack. Divers in wetsuits are. Followed by surfers in wetsuits. Obviously, this reflects the fact that divers and surfers may be mistaken for seals or sea lions, whereas kayakers may be mistaken for people who like to spend a lot on boats and then get really wet and cold.
That’s not to say that sea kayakers should take their safety for granted. For one thing, we’re going into “prime time” for shark attacks on the Northern California coast. No joke. More attacks are reported in August, September, and October than any other time of year, according to shark researchers. And the majority of documented attacks on the California coast during the last 50 years have occurred between  Morro Bay and Crescent City.

(There’s no shortage of Web sites and blogs on shark incidents – here’s one that features recent reports from the Pacific Coast. Note the July posts from kayakers who were in Monterey Bay, Big Sur, and at Malibu Beach.)

Whether you’re a paddler, diver, or swimmer, there are certain factors that definitely increase your risk of shark attack, according to Dr. John McCosker, chairman of the Department of Aquatic Biology at the California Academy of Sciences. Last April, McCosker gave a tongue-in-cheek talk on “How to Get Eaten by a Great White Shark,” as reported by the San Francisco Weekly.

To summarize, McCosker said, “You should definitely flounder around in a wet suit on top of a surfboard,” go for a swim in the Red Triangle during fall and early winter months, or take up diving for abalone off the Farallon Islands, a favorite great white hangout. Actually, McCosker is a prominent shark defender whose concern for the survival of the species is well-documented. It’s just that no one listens until he starts talking about sharks eating people, rather than people eating sharks. sea kayaking California sharks coastal paddling