Update 5/30/20: High levels of E. coli from fecal contamination have been detected in the American River near Discovery Park, prompting a county health warning.
Update 4/29/20: The county boat launch and beach at Discovery Park remain open at this writing, despite the Covid-19 crisis. But a brief paddle there last week confirmed this is not the best time or place for kayaking. The river is jammed with fishing boats and the shoreline is packed with anglers. Too many lines in the water, not to mention the occasional yahoo who tried to snag our kayaks with a long cast. I strongly recommend waiting til fall to paddle here.

Even if you’ve looked over a stretch of water a thousand times, you can never really appreciate the view until you’ve seen it from a kayak. Case in point – the Sacramento River as it rolls by the capital waterfront on a sunny autumn afternoon.
A recent, spur-of-the-moment paddle probably covered no more than a meandering four miles, tops, roundtrip. But it proved to be a most surprising and pleasurable first voyage of urban discovery.

The water was low and slow – the best time for paddling this stretch of the Sacramento. Most of the year, it’s a big, muddy freight train of a river filled with hidden snags, not a very safe place for kayakers.
Be advised that some of the scenery is a bit gritty – there’s rip-rap and riff-raff aplenty at the shoreline. Along the banks, crumbling remnants of a bygone industrial waterfront peek out from behind thick curtains of vine. A sleek, modern parkway path runs alongside rusty railroad tracks on downtown’s edge. 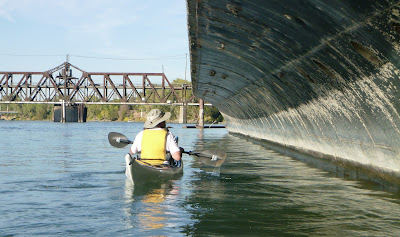 Then there’s Old Sacramento, with its gold (credit card) strike accoutrements – a paddle wheeler hotel, tour boats, touristy shops and restaurants. And on this day, a surprise at the dock – avast, mateys! The two-mast Hawaiian Chieftain has made port here for a few weeks. (Details below.)
We launched from a smooth, sandy beach at Discovery Park, at the confluence of the American and Sacramento  rivers, and floated downstream under the I Street Bridge. This metal-trussed swinger looks all of its 101 years but still carries Amtrak and freight lines across the river daily without complaint. Well, maybe a creak or two.
Paddling along the western side of the river, we caught a glimpse of Raley Field, a minor league gem, as we passed beneath the glowing golden arches of the Tower Bridge. Ahead loomed the I-80 overpass and its massive concrete columns. Bridges in this area have booms and other structures around their foundations to deflect  debris, so we stayed alert in these spots.
The City of Sacramento’s Miller Park provided a convenient stop-stretch-and-turn point. On the way back, we worked the east bank and noted that the current on this side of the river runs stronger than on the shallow west side.
Still, it wasn’t too tough going upriver, though several boating anglers seemed impressed with our paddling. We assured them that their elbow-bending exercises with cans of cold brew were just as healthy. (And we kept an eye on fishing lines, but speeding boaters and their choppy wakes proved to be more of a hazard.)
Paddling up to the docks in Old Sac, we reached the Hawaiian Chieftain, a Washington State-based replica of a 19th century trading ship that serves as a floating classroom for grade schoolers.
A peek inside the main saloon revealed swashbuckling details that would have made Errol Flynn or Johnny Depp feel right at home.
Nearing Discovery Park, we passed what I consider to be Sacramento’s most stunning water vessel – the "Origami Destroyer." While it's permanently "docked" in the river, its shape suggests that it could roll in the gangplank, haul anchor and speed away on some sci-fi adventure. If you stand on its "deck," the current creates the illusion that the "bow" moves through the water.
Others call it the municipal water intake and treatment plant, but in my book, a work of architecture so original and unusual deserves a better moniker.
LAUNCH LINES
Discovery Park has a dock and concrete boat ramp on the north side (over the bridge), but it can get pretty chaotic with fishing boat and jet ski traffic. Try the car-top-craft-only launch on the park’s south shore – take a right just after the park entry kiosk and go down the hill. If that’s too steep and rough, then proceed on to park adjacent to the south shore beach.  (Link to fee and parking info.)


Miller Park offers picnic areas, restrooms, and marina facilities.
In Old Sac, the HawaiianChieftain will be open daily for walk-on tours until Dec. 13, according to local news reports.
The I Street Bridge and other Sacramento area river bridges are working pieces of local history.
At the time of this writing, the Sacramento River levels near downtown were running below eight feet, with a lazy current. Avoid windy days and high water periods when current, snags and river traffic may create dangerous conditions.
© Glenn Brank 2012
Posted by Glenn Brank at 5:12 PM