Shark attacks, kayakers: Time to get out of the water?

Earlier this month, I had some fun with the Discovery TV Channel’s “Shark Week,” while pointing out – quite seriously – that we're headed into “prime time” for shark attacks on the California coast. My post quoted shark authorities as saying that divers and surfers in wetsuits are the most likely accidental victims when sharks go cruising for a seal meal.

Uh, did somebody ring the dinner bell? Since then, there have been at least two documented incidents where sharks attacked and gnawed on kayaks, though the paddlers escaped injury. Does this mean coastal kayaking is too risky? NorCal Yak consulted a prominent aquatic scientist who offered some perspective and safety advice for kayakers, based on years of investigating shark incidents. First, the incident details:

Last Saturday, kayak fisherman Adam Coca of Pinole was near Pigeon Point when a shark believed to be a great white hit his boat. "I felt it hit the nose of my boat from below, like boom! Kaboom! Then it flipped the boat over…I held onto my boat and looked right into its eye,” Coca said. "The shark was at least as long as my boat." See a detailed account and photos in The Santa Cruz Sentinel. And note this yak angler was in an Ocean Prowler – a stable, heavy, 13-foot sit-on-top that wouldn’t tip easily.

Earlier this month, veteran sea kayaker Duane Strosaker had paddled several miles out from Gaviota State Beach in Santa Barbara County when a great white chomped down on his kayak and held it for several seconds before releasing and swimming away. The hull was punctured and the paddler shaken, but he returned to shore safely. Strosaker is not your average recreational paddler – he often paddles several miles out to monitor oil rigs in areas where seals congregate. See the Strosaker blog with photos. He also filed a report with the California Department of Parks and Recreation.

For an expert reaction, NorCal Yak contacted Dr. John McCosker, chairman of the Department of Aquatic Biology at the California Academy of Sciences, who for many years has studied sharks and shark attacks on humans. He's quite accustomed to public and media misperceptions about sharks. (For example, take this fear-inducing photo from the  Discovery Channel.) 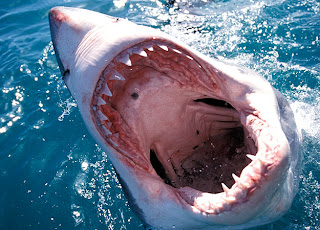 “I’m not surprised by the recent incidents,” said Dr. McCosker. “These two recent attacks makes a kayaker pause, but until there are more, I’m not about to think of this as significant. My colleague, Bob Lea, and I have been studying white shark attack behavior for a long time...

“As to the Gaviota attack…I’ve corresponded with Strosaker and he seems to be a very good observer…There certainly are white sharks off Gaviota and he was fortunate to come back with a nearly intact boat. On 26 January 1989 ocean kayakers Tamara McAllister and Roy Jeffery Stoddard were attacked off Malibu; her partially eaten body was found and his was never discovered.”

On the attack reported by fisherman Adam Coca, Dr. McCosker said, “I’m not at all surprised by the events….A similar attack on kayaker Dan Prather occurred at Bean Hollow (same area) on 21 July 2008. He was not injured but his kayak was. And on 15 September 1984 abalone free diver Omar Conger was attacked at the surface above a 5 meter bottom and died.”

So, asked NorCal Yak, do these recent kayak attacks indicate any changes in shark behavior in areas frequented by kayakers?

“No, I don’t find these attacks out of the norm,” said Dr. McCosker. “They become the sixth and seventh kayakers to have been attacked (Lea and I count the Malibu event as a single attack) in California, certainly far fewer than the total number of surfers, swimmers, and abalone free divers. I suspect that the entry of kayakers into ocean waters is increasing, but not so significantly that it would make them more desirable targets for white sharks. Time will tell.”

Is there anything kayakers can or should do to distinguish themselves from prey – using specific colors and patterns on their boats, noise-makers, or the like?

“In terms of kayakers distinguishing themselves from natural prey, there isn’t much that I can suggest other than my hunch that the shorter the kayak, the more likely one is to imitate an elephant seal," said Dr. McCosker. "In those instances where a kayaker is within a flotilla and is attacked, he/she was in the smallest boat. The color is probably insignificant in that the local waters are moderately murky and the shark typically sees the silhouette of the boat anyway. The sharks don’t seem to be attacking it with a massive bite, but rather an investigatory chew, so that may also affect the calculus of the attack situation.

“I suggest that kayakers could best reduce the likelihood of a shark encounter (which is very remote) by avoiding those areas where there are aggregations of pinnipeds (Farallon Islands, Ano Nuevo Island, and perhaps Pigeon Point), and where there has been a history of attacks by white sharks. And more importantly, one should avoid kayaking alone. If you are attacked and bitten then unless there is someone there to take you to shore, you have a likelihood of dying,” Dr. McCosker concluded.

So there you have it – really pretty simple. As long as you're comfortable and competent to paddle the coast, you don't need to get out of the water. But don't go out alone. Avoid areas where sharks are known to have attacked people in the past. And when it comes to kayaks, size might matter. Remember what the police chief said in that classic shark movie: “You're gonna need a bigger boat.”