SAUSALITO – The guy paddling a Prijon sea kayak stared up at a three-story, aqua-green houseboat with several observation decks, tons of potted plants, French doors, its own private dock and a multi-million-dollar view of the bay. “Hey, with global warming, you think more of us will be living this way in a few years?” he called out.

Welcome to Kevin Costner’s “Waterworld” – with a much more upscale, suburban seascape. Swanky downtown Sausalito may be awash with art galleries and jewelry shops, but the real bling-bling is a few blocks away, where houseboat neighborhoods have dotted the shoreline for decades. While most visitors gawk from streetside, these houseboat ‘hoods are really made for sightseeing in kayaks. 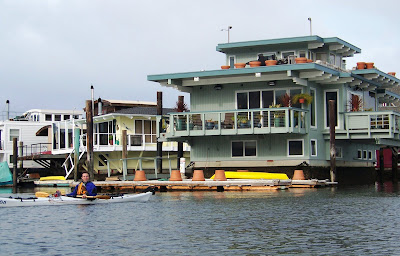 It’s also one of the most convenient kayaking destinations in Northern California, perfect for novice paddlers. Just a few minutes off U.S. 101, you launch from a soft-sand beach sheltered from the bay chop. No kayak? No prob. Within a clam shell throw is Sea Trek Ocean Kayaking Center, an outfitter that’s been putting people on the water for nearly 30 years. (Find a link in “Launch Lines” below.)

“On a nice weather weekend, about 80 percent of our business is from novice kayakers,” says Sea Trek manager Steve Hayward. “This is the best ‘soft’ launch location on the bay.” He also points toward Tiburon, Belvedere, Angel Island and the Golden Gate Bridge, destinations for more experienced sea kayakers. Another plus: Sausalito often enjoys sunny skies when the rest of the bay is fogged in.
Except for the recent Sunday when I was there. To the west, Alcatraz looked like a small fuzzball on a blurry horizon. And it was pretty chilly. So a two-and-a-half-hour tour of homes afloat seemed like the best option.

About half a dozen marinas are on this stretch of Marin County shoreline, so it’s easy to stay in sheltered water to get to these historic houseboat neighborhoods. One of the first houseboats I saw left me grasping for a description – mainly because I was never any good at geometry. 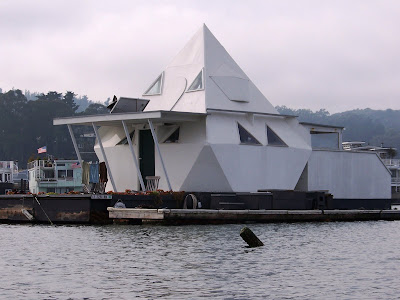 Other Sausalito houseboats range from funky to fantastic. (Click on photos for a closer view.) Some are converted barges and old tugboats. Others seem based on pure whimsy – and built on huge concrete platforms. These are definitely not the mobile-home-on-pontoon craft you see on major reservoirs such as Oroville and Shasta. The legend, lore, and controversy surrounding 400-plus houseboats moored in Sausalito are well-documented (brief history and more info).

The term “historic” definitely applies to some of these craft, which show decades of exposure to wind and salt. But for the most part, this is one spiffy ‘hood -- skylights, solar heating panels, satellite dishes and even a dome or two. “Sunset” magazine once complimented this floating community for its attractive container gardens. Somewhere, an old salt spun in his watery grave. 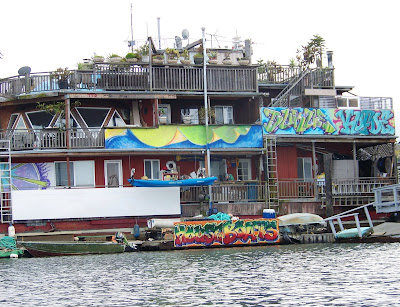 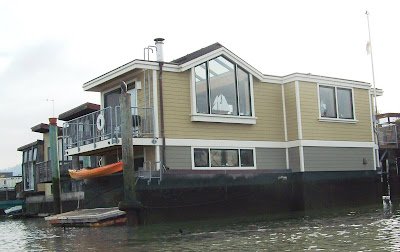 It’s tempting to paddle up for a closer look to some of the more elaborately decorated houseboats, but I tried to keep a respectful distance – after all, wouldn’t you be upset if someone suddenly appeared at your bedroom window? The day I was there, one thoughtless yaker got the message when he paddled too close to an entryway and was greeted by a large, unfriendly dog.

The kayak launch beach is tucked into Schoonmaker Point Marina, which has public restrooms and limited public parking. Sea Trek Ocean Kayaking Center has a fine Web site with clear driving directions to the beach, and the outfitter offers a variety of tours and services for both novice and experienced paddlers. Even though I brought my own kayak, Sea Trek’s Steve Hayward was very helpful and gracious -- more on this in an upcoming post. 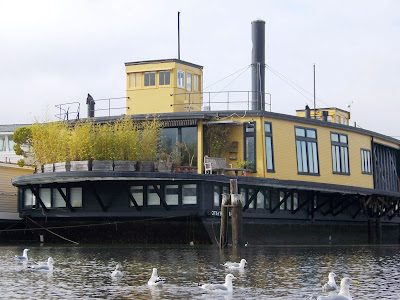 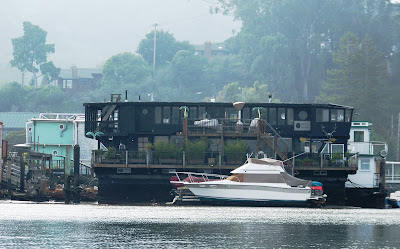 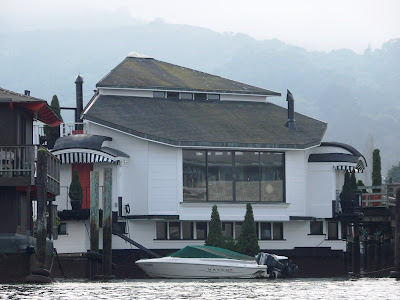 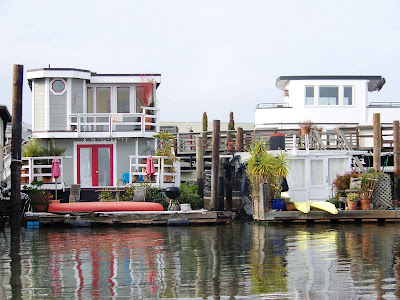 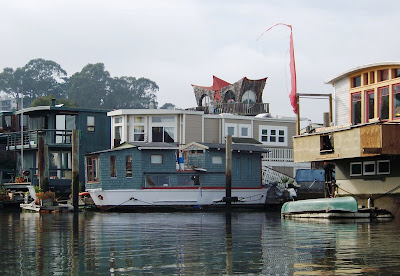