Updated 5/16/15: Paddling on Lake Tahoe as the California drought continues.

LAKE TAHOE – Water so blue that it doesn’t seem real as you launch from a sheltered, white sand beach. A leisurely paddle to a tiny fantasy island and a mansion from Valhalla. And on the way, scenery that’s over the top, even by Sierra standards. This kayak trip makes my favorites list with room to spare.

Start at D.L. Bliss State Park. Situated almost perfectly between the north and south shore, it easily qualifies as one of California’s most beautiful parks. Once off Highway 89, the park’s narrow paved road eases down two miles of steeply wooded terrain to the west shoreline. Even if you’re not into camping, the layout and well-kept facilities are impressive. Tahoe kayak paddling adventure

The road ends at Lester Beach, with day parking and an easy walk to the shoreline. During peak summer months, the lot is sometimes closed and the beach becomes a human zoo. But on a weekday in mid-June, an early morning walk on the sand revealed more footprints from raccoons and bears than from people.

That June day also was cool and nearly cloudless. Just around Rubicon Point came the first moment of awe as the highest Sierra peaks towered in the distance, sun glinting off snowcaps. A lone power boat joined me as we headed south, its wake rippling the reflections of massive granite and stately pine.

A gem-like expanse of turquoise water spread beyond the point. The lake bottom dropped at least 20 or 30 feet deep but remained crystal clear for several minutes of paddling. Then my kayak was suddenly surrounded by that incredibly deep shade of blue that marks the true depths of North America’s greatest alpine lake.

I also love this part of Tahoe because it’s one of the few continuous stretches without vacation homes, private docks, and “no trespassing” signs. To the north and south, many summer houses crowd the shoreline and some of their boathouses are larger than my home. I don’t begrudge those who have the good fortune to own such places, but they seem to be unoccupied most of the time. So many beautiful lake and sunset views go unseen. 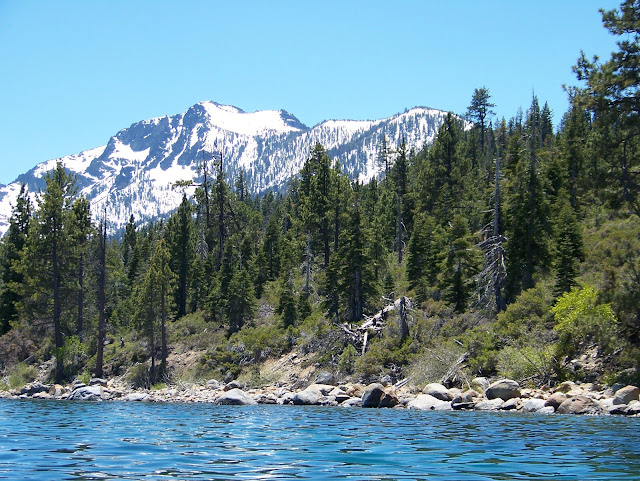 No problem with the view a hundred yards or so out on the lake. It can take less than an hour to paddle from Bliss to the mouth of Emerald Bay, but spectacular vistas demand a slower pace to enjoy the grandeur. All the better, too, with fewer power craft around – another reason to paddle early or late in the season. When water traffic is quiet and conditions are right, you can hear Eagle Falls before it comes into view above Emerald Bay.

On this particular day, Eagle Falls was truly worthy of the name. Attracted by commotion near the north side of the bay, I spotted a power boat idling near the shore. Nearby, a majestic bald eagle sat in the remnants of a once-tall conifer. Apparently, the eagle had nested atop the sheared-off tree and was in no mood for gawkers. It flapped its wings and kept swiveling its head in near-360 circles until the clueless power boater finally moved on. I stayed back, used a telephoto lens, and hoped no one else would come along to disturb the scene, at least for a while. 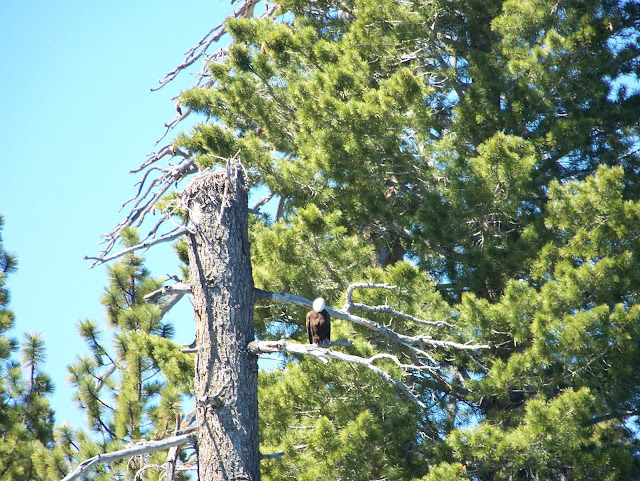 Only a couple of minutes more paddling and the mouth of Emerald Bay popped into view. The bay is framed by granite peaks and towering pine forests. There's a tiny fantasy island with its own mini-castle. And against the far shore sits a mansion known as Vikingsholm – like an old TV Ponderosa homestead gone Nordic. Above this fabulous spot spills Eagle Falls. Yep, it's one spectacular panorama. 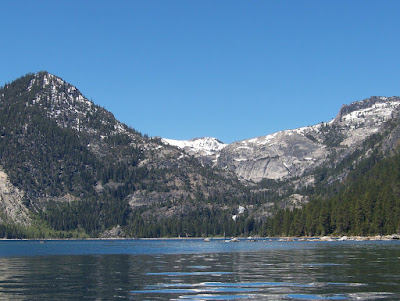 There’s also a boat camp with about 20 campsites inside the bay. A floating dock was completed for the 2010 season, and the camp has running water and vault toilets. (Camping reservations required, details and link below.)

Inside the bay, there's a 5 mph speed limit, so even large yachts and a couple of tourist sternwheelers don’t pose too much trouble for kayakers. Just keep an eye on the traffic and prepare to paddle toward shore if needed. 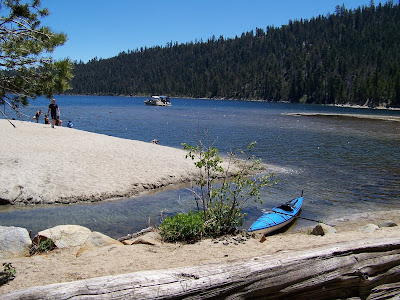 Approaching Vikingsholm, I found a nice sandy beach on the south side, near the ticket cabin, in an area too shallow for power boats. According to park officials, Eagle Falls spills into a creek here, but on my visit, the lake was feeding the outfall, perhaps thanks to snowmelt. The current carried me right into a secluded takeout spot for a picnic lunch. 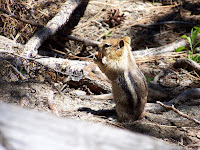 Which was where I discovered it was chipmunk season. The little buggers were everywhere, zooming around like furry motorized R/T toys with bushy antennae. Dozens of them. No, hundreds of them. Still, I didn’t worry when they began surrounding my picnic table, since a stomp and a yell made them scurry away. Until I was distracted for a moment, looked down, and noticed the rest of my PB&J sandwich was gone. Looked up and there it was, ten feet away and already almost devoured by Alvin's delinquent cousin.

Packing the rest of my food into the kayak hatch, I strolled over to Vikingsholm. The story of this place is sort of the original “Lifestyles of the Rich and Famous.” It began with a mega-rich, refined, and generous Midwestern society lady in the 1920s. In the 1950s, the State of California was fortunate to obtain the property, and much of Emerald Bay, for a state park. This included Fannette Island – the only island on Lake Tahoe –originally used for tea parties. The ruins of a stone teahouse remain. Ah, for the days when folks knew how to live it up lavishly yet tastefully. And Vikingsholm tour guides can tell you all about it. (More info in “Launch Lines” below.) 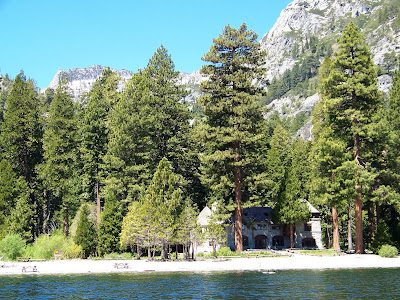 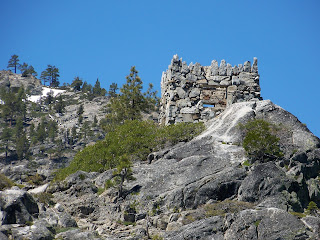 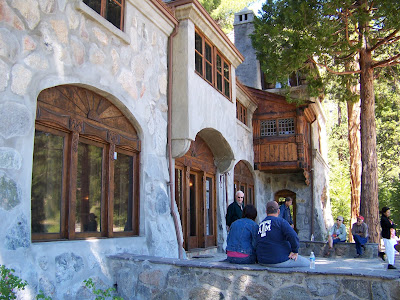 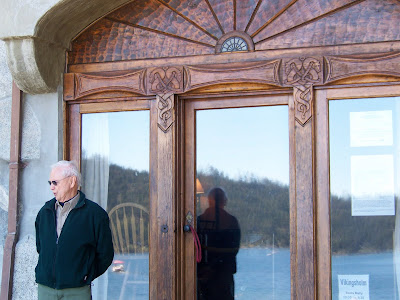 Paddling back out of the bay, it was fun to keep that 5 mph pace with a 50-foot yacht, at least for a few hundred yards, and then casually pose for the photo-snapping tourists aboard a paddlewheeler. Then it was on to Baldwin Beach before heading back to D.L. Bliss by mid-afternoon.


Lester Beach, so tranquil earlier, was now in party mode. Several power boats anchored together, their boom boxes blasting, while children ran up and down the shore. Still, it was fun to hang on the beach, talk kayaking with some nice folks, and relax after putting the kayak back on the roof rack. Plus it gave time to open car doors and windows to cool things down a bit.


Later, approaching the park entrance, I heard a strange “chit-chit-chit” sound from the passenger side of the car. Turned and came face to face with a chipmunk. In perfect sync, we both banged heads against our respective side windows while trying to bail out of the car. Chaos ensued, but we quickly agreed to part ways. And I could hardly wait to check my kayak hatches for other hitchhikers.

Again, the best time to kayak Tahoe is before or after peak summer season. After Labor Day, there should be several weeks of good paddling in the fall. However, the 2010 camping season at D.L. Bliss State Park ends on Sunday, Sept. 26, and after that, gates are locked to motor traffic. In the meantime, figure on weekend crowds. If you want to launch from Lester Beach, get there early. Better yet, try a weekday, though park employees say even Tuesdays and Wednesdays can get busy. Day use hours are sunrise to sunset. Bliss is about 16 miles from Tahoe City on Highway 89.

In October, alternative launch sites might include Camp Richardson or Baldwin Beach, both to the south of Emerald Bay off Highway 89 and administered by the U.S. Forest Service. Richardson is a big resort run by a concessionaire, while Baldwin is very basic. Kayaking to Emerald Bay won’t be quite as pretty from these points, but given the time and energy, you can still paddle on to Bliss and Lester Beach for some day hiking.

An additional note: Make sure your kayak has been thoroughly washed and is free of debris from other waterways before you go to Tahoe. There's a growing battle on an Asian clam invasion that threatens the lake's clarity. 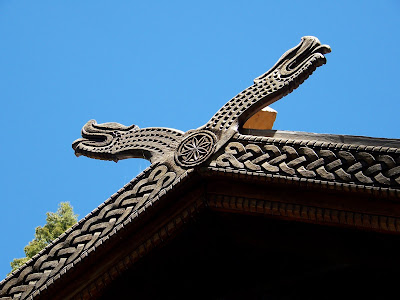 At Emerald Bay State Park, there are guided, interior tours of Vikingsholm on the half-hour from 10:30 a.m. to 4:30 p.m. daily during the summer season. The stories about this place and its original owner are fascinating. (Architectural detail above.) If you're interested in kayak camping in Emerald Bay, reservations are required til Sept. 12, and the campground closes for the season at the end of September. (Go to Emerald Bay link.)

Now for the logistics: Depending upon how close you stay to shore, it’s about 2.8 miles, one way, from Lester Beach to the mouth of Emerald Bay. Once inside the bay, you might paddle another 1.5 to 2 miles, and it’s another 1.7 miles or so to Baldwin Beach. Then it's another 1.5 miles or so south to Camp Richardson, which has its own beach and marina.

Don’t forget to factor weather into the distance equation. Winds often pick up in the afternoon, and a heavy chop on Tahoe can rival conditions on an ocean bay. Another good reason to start any paddle early in the day. Afternoon thunderstorms are also a fairly regular occurrence, so check the forecast. And always take plenty of water on a Tahoe paddle – at this elevation, the sun will take its toll, even on a cool day.

Finally, a word about Tahoe wildlife. In general, give it a wide berth. Most people have enough sense to avoid bears, but they may not realize those cute chipmunks can carry bubonic plague. Keep car doors and windows closed when parked. I learned the hard way. kayaking Lake Tahoe California lake paddling