Kayaking from China Camp -- enjoy it while we can

(7/23 update: A nonprofit group takes over China Camp to keep the park open...see news story for details.)
CHINA CAMP – This has to be one of the most kayaker-friendly spots on the north end of San Francisco Bay. It’s conveniently located, offers cheap parking close to a good launch beach, provides picnic tables and clean restrooms, and features spectacular paddling to several points of interest. Oh, and a minor detail – China Camp State Park could be shut down by mid-summer.


It’s always been a hardscrabble life at historic China Camp, but it’s a beautiful place. A warm-weather paddle on a recent weekend underscored what’s at stake for Northern California kayakers and other outdoors folk. (This is the second in a two-part series on China Camp. Links to the park rescue efforts may be found at the end of this post.)


We launched from the village beach shortly after chatting with an unassuming, white-haired gentleman named Frank Quan,  85, the last resident of China Camp. He’s seen the decline of a way of life and the environment that supported it. Fresh water that once nourished life in the bay has been diverted elsewhere. (See VIDEO.) Now park funds are drying up as well.

With China Camp’s future in doubt, NorCal Yak talked some paddling pals into visiting while we still could. And exploring the rugged Marin coastline, if your idea of rugged is multi-million-dollar homes with views to match. But there’s also quite a bit of natural beauty – the Marin Islands – which, in my over-active imagination, could still be a haven for those sybarites, hot tubs and peacock feathers of Marin in the 1970s.
From the beach, looking southward toward Pt. San Pedro, we immediately spied what appeared to be a couple of small islands in the far distance, so off we paddled. The only problem was, as we got closer, the “islands” didn’t loom much larger. In fact, they were not islands atoll (but about as ugly as that pun). Turns out they’re called “The Sisters” and apparently related to another set of rocks across the channel, “The Brothers.”

My small miscalculation didn’t exactly inspire confidence in our paddling pod, but it was such a nice day – light winds, sunny skies, highs in the 60s – that all was forgiven,  and we paddled on to the islands. Wildlife yes, hot tubs no. These are federally protected nature refuges, so we didn’t get to hunt for peacock feathers on foot. Though it was entertaining when one of our pod got out of her boat in the shallows and nearly had her water socks sucked off in the mud.

On this incredibly calm and clear paddle, we could even see the Transamerica Pyramid on the San Francisco skyline, far beyond Red Rock Island and the Richmond-San Rafael Bridge. Any casual thought of venturing closer to the bridge was put aside after we heard a humongous honk from a freighter passing miles out in the bay. “Gee, look at the wave it’s making,” someone said. About 20 minutes later, we began rolling in large but thankfully gentle swells. Yep, a good reminder to respect what’s in the bay, even on the calmest day.

On the way back to China Camp (round trip paddle of 7.8 miles), we passed some very un-Marin-like industrial sites from pre-hot tub days. Three tall smokestacks mark the spot where  factory kilns turned out 10 million bricks a year in 1913. Nearby, right on the bay, is an open rock quarry adjacent to the swanky-looking McNears County Park (named after the brick magnate). Which makes you wonder, if one of the richest counties in the nation sports a public park that could pass for a country club, why can’t it help save China Camp?

Back in the village, our picnic tables offered the same mega-buck views enjoyed by the top one-half-of-one percenters in the nearby ‘hoods. We also took time to explore the village grounds, small museum, and classic café. NorCal Yak pals Bob and Fran rated  the café clam chowder first-rate. 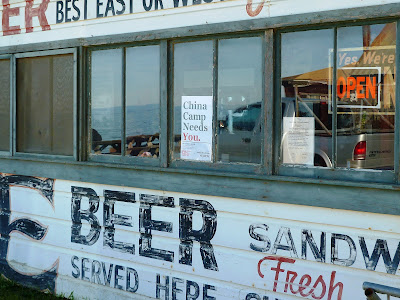 But I also read somewhere that the bay shrimp on the menu no longer come off the dock just outside, but must be shipped in from Oregon. Yes, the fragile environment that created China Camp and its way of life is gone forever, as Frank Quan so simply put it. Now the question is, do Californians care enough to save China Camp's memories?
LAUNCH LINES
The easiest way to reach China Camp State Park, located just north of the City of San Rafael, is to take the North San Pedro Road exit off Highway 101. Day use parking is just $5 and park lots are much safer than parking on the road shoulder. And to help you keep your islands straight while kayaking the San Francisco Bay and elsewhere, here's a list of California islands. To find out more about efforts to save China Camp State Park, contact Friends of China Camp or the Marin State Parks Association. For more info about the plight of state parks and efforts to find nonprofit park sponsors, read Christine Sculati's blog. 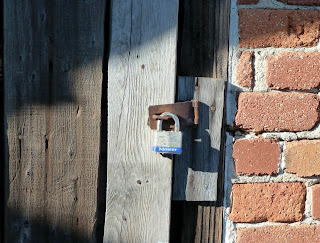