(7/23 update: A nonprofit group takes over operation of the park, saving it from closure.)

Rack that kayak for a paddler’s ideal day trip and your drive might end on San Pablo Bay in Marin County. At China Camp State Park, kayakers enjoy fabulous views of the bay, plus hiking, camping, bicycling, fishing, and a fascinating glimpse of California past.

Oh, but there’s more. One resident still remains in the tiny fishing village that gave the park its name. Will 85-year-old Frank Quan lose his life-long home, as warned in some media reports last year?
We’ll get to that, but first, let’s return to last August and China Camp’s annual Heritage Day Celebration.  It was a wonderful festival -- and possibly China Camp’s last. So if you missed out, here’s a recap in words, photos and video. (Click for VIDEO of "Grace Quan" heading out into the bay. )

A typical summer fog began to lift upon launching from Bullhead Flat, a shallow cove around a bluff from the village. Not the best put-in, but the China Camp parking lot was already full and the access road blocked to vehicle traffic. Turned out fine, because the view from the water was just awesome.


Several impressive yachts were anchored off the village as small sailboats darted back and forth around them. Two eye-catching craft moored at the pier – the “Grace Quan” a replica of a Chinese junk (named after Frank Quan’s mother), and the “Alma” a historic scow schooner. Curious visitors swarmed over both craft, which sail over to China Camp only for this event. A wooden boat club also convenes here on Heritage Day, and several fine works of marine art were displayed on the beach.


The village itself bustled with visitors, stirring up a faint vision of its 19th century heyday when hundreds of former railroad workers founded a fishing community, built their own boats in the style of their homeland, and pulled millions of pounds of shrimp from the bay. China Camp is the last such site on the West Coast, and Heritage Day celebrates the unique culture that it created.  And last August,  the emphasis was also on fundraising by Friends of China Camp to help support the park while efforts are made to find a nonprofit operator.


In addition to a hungry, SRO crowd in the village café, visitors trolled tables and booths to buy art, T-shirts, and Chinese calligraphy. But the big draw was the colorful entertainment – lion dancers, singers and acrobats – that drew an appreciative audience. (The VIDEO of a young gymnast, shown below, wasn’t speeded up or modified – she actually made those amazing moves.) 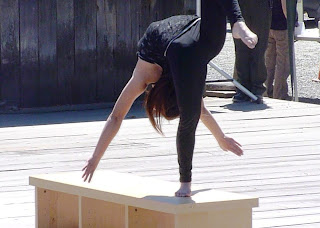 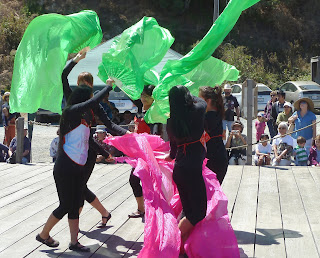 ~ ~ ~
In the early 1900s, anti-Chinese sentiment was on the rise, China Camp's shrimp netting method was outlawed, and many residents left the area. Part of the village burned in 1911, but the Quan family stayed on. The story is told in a modest museum that looks out over the water.

Now it’s down to Frank Quan, the most vigorous 85-year-old I’ve ever met. Would State Parks actually evict him from China Camp? No way, says Marin Park District Superintendent Danita Rodriguez. “He’s our living history icon…who better to tell the story of China Camp?” Plus, she readily acknowledged that it would be a PR disaster for State Parks, since Frank Quan was granted lifetime rights to stay in his home when China Camp became a park in 1977.

"We’re on two tracks right now,” Rodriguez told NorCal Yak in describing the park's prospects. She's clearly a China Camp ally, but her options are few. “One involves preparations to close the park down (in July). The second is looking for donors to help keep the park open.”
That wouldn’t seem so daunting in Marin County, listed by Forbes magazine as one of the most affluent areas in the nation. Yet so far, there’s no firm commitment by anyone to take over China Camp. That may be due to the fact that upkeep in the 1,700-acre park runs more than $500,000 a year, while fee collections generate only about one-fourth of those costs.

Part of the problem is that the county’s North San Pedro Road runs through the heart of the park, so many visitors park on the road shoulder and don’t pay the $5 day park parking fee.

If the park was closed, people could still access the area on the county road, and vandalism would surely increase. Park rangers already note that those freebie parkers often pay a price in car burglaries, while some mountain bikers illegally carve their own trails in the park landscape.

Friends of China Camp has just launched its own Web site, and a nice one it is, taking direct donations online. The Marin State Parks Association also is working to save China Camp.

Christine Sculati's blog is the leading source of info on the plight of state parks and the efforts of nonprofit groups to rescue parks.

The park also has a Facebook page.
Next: Back to China Camp on a winter weekend, kayaking around the elusive Marin Islands, and a conversation with Frank Quan, China Camp's last resident.
© Glenn Brank 2012
Posted by Glenn Brank at 5:23 PM