Stone Lakes a natural for kayakers

It’s difficult to imagine a kayaking spot so close to urban California that feels so far away. Stone Lakes National Wildlife Refuge, just off Interstate 5, nestles quietly into an area between downtown Sacramento and suburban Elk Grove. Less than five minutes off one of the busiest highways in Northern California, the refuge seems as under-the-radar as The Island on TV's “Lost.”

Which led me to suggest – tongue firmly in cheek – that the place needs some billboards and maybe a neon sign or two. “No, we can’t do that,” said refuge Ranger Amy Hopperstad with a smile. “But we want more people to know about Stone Lakes, and be able to enjoy the refuge, so we’re happy to have kayak tours.”
river lake kayak

In May, the U.S. Fish and Wildlife Service began its second season of free, guided kayak tours on weekends. Tours continue through September. (See previous post and “Launch Lines” below for details.) For such a low-key attraction, public response has been excellent,

said Ranger Hopperstad. My tribe brought a dozen kayaks to Stone Lakes on a recent Saturday morning, and we were surprised when more than a dozen other paddlers showed up as well. The visitor flotilla included canoes and tandem yaks and paddlers of all ages and skill levels. 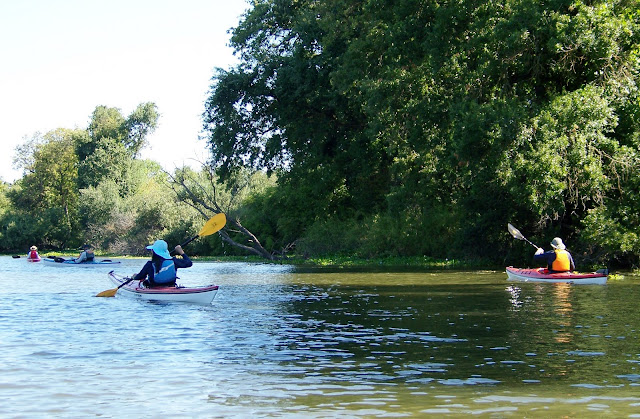 This is a great kayaking opportunity, since the 6,000-plus-acre, marshy refuge is largely inaccessible. There are no developed facilities. Other than guided tours conducted by refuge staff and volunteers, no boating or paddling is allowed, in order to protect wildlife and a fragile environment. 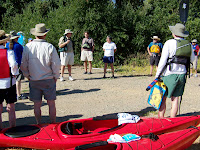 Accompanied by affable volunteer guide George, our group received a brief history and description of the area and heard about some of the wildlife we might observe. Then we paddled on the SP Cut, a man-made slough created when Southern Pacific dredged an area to create a rail line around 1900.

Frankly, my expectations were low. From what little I knew of the area, I dreaded stagnant, smelly water, lots of mosquitoes, and a hot, sweaty paddle without shade. Something just slightly better than Bogart pulling “The African Queen” through a swamp while Katharine Hepburn quavered, “Wow, look at the size of those leeches!”

But after we launched from a muddy shore, this part of Stone Lakes reminded me more of a wonderful old “Tarzan” movie. You could almost see Johnny Weissmuller swing from a vine and jump on a croc as it stalked our kayaks. Of course, the croc was just a snag in the water, and the vines were poison oak tendrils that grew 30 to 40 feet up into the trees. But it was a beautiful Saturday morning with a cool breeze that fanned our faces and rustled through thick stands of bulrushes, blackberry thickets and shoreline trees. 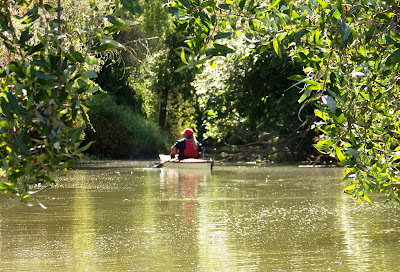 The star attractions here are on wing. More than 150 bird species call Stone Lakes home at least for part of the year, as this area is part of the Pacific Flyway. On our tour, pairs of hawks circled and soared high above us, occasionally announcing their presence with piercing screams. 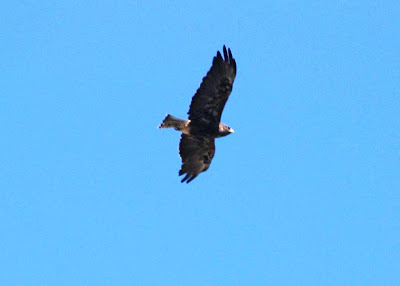 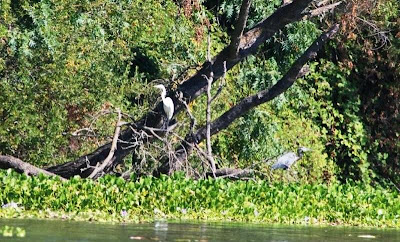 Along the shoreline, we saw magnificent great blue herons and stately white egrets. Unfortunately, the size of our paddling group tended to put these long-legged residents into flight before we could get within close camera range. (Thanks to NorCal Yak friend Pam Smithstan, a veteran photog with a long zoom lens, for sharing the two photos above. In the second photo, note the “stealth” heron just to the egret’s right.)

Except for an occasional passing airplane, a couple of power lines and a steel gate or two, Stone Lakes conveys just how this part of California must have looked when Miwok Indians lived and hunted here. But if the refuge acts as a barrier to modern encroachment, it's also become a haven for an exotic natural invader – water hyacinth. Our tour was set to go up the slough about four miles, but we got perhaps halfway there when we hit a green wall. It was like trying to paddle through a giant tossed salad. 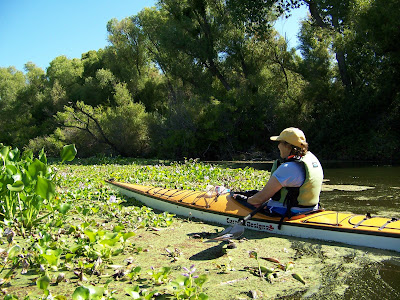 Water hyacinth may look pretty, but it's a non-native species that clogs waterways and dramatically alters the balance of nature. And it has been a major environmental challenge for government agencies and preservation groups in the Sacramento-San Joaquin Delta. Workers at Stone Lakes use an air boat to get into the green mess with applications of an environmentally-friendly herbicide, and in some cases, they've had to remove the free-floating aquatic weed by hand to keep areas clear. Water hyacinth grows like green wildfire if left unchecked. 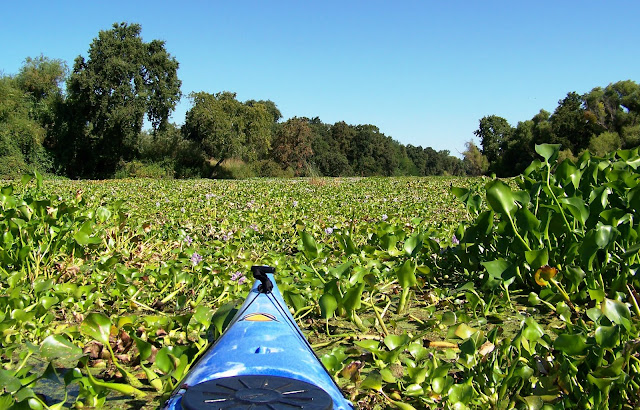 Stone Lakes NWR is truly a natural for kayakers, birders, and nature lovers. If you can’t go on one of the guided kayak tours that continue through September, consider nature walks and docent-guided tours that begin in October. (The walker link shows previous tours, but will be updated later this season.)

And kudos to Stone Lakes staff for one of the most user-friendly, well-written Web sites I’ve seen from a government agency, as well as their creative efforts to provide more public access to a natural treasure.
California river lake kayak paddling nature preserve