Meet my kayak team and hit the brakes

It’s high time we introduced Team NorCal Yak. First of all, this photo does not create an optical illusion – the two kayaks are indeed longer than the car on which they’re racked. This is what happens when you buy a vehicle before you discover kayaking. On the other hand, there is an unexpected benefit when dueling with rude drivers. More on that in a moment. river lake ocean kayak 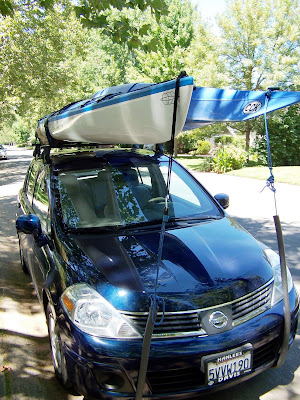 At top left is my team flagship, the 17-foot “Ahi,” so named because a friend noted how much it resembled a large tuna. (Yes, ahi is yellowfin and the kayak looks more like a bluefin, but if you’re thinking this, you’ve just diagnosed yourself as obsessive-compulsive.) I originally considered the
name “Bluick” since this particular craft is as blue as Lake Tahoe and bigger than my father’s Buick. But “Ahi” just sounded better. Plus, I get to open a bottle of champagne to make the name official, and not all that bubbly will spill on the bow, I assure you.

On the right is “Ol’ Blue,” a former dealer rental craft that is nothing fancy but does its job, which is to take me places I wouldn’t want to take lady Ahi. Fact is, Ol’ Blue is a bit slow and has its share of scars, which makes it a lot like me. But scars are always good for stories, and sometimes, they’re even true.

Now the Nissan Versa, better known as “Blueberry.” Yeah, there’s a blue theme going here. Not exactly a muscle car. I wasn’t looking for wheels to intimidate people, but geez, I’ve never had a vehicle so dissed on the street. People just pull right out in front of me. No point revving the engine at them, since it sounds like a Hoover vacuum that just sucked up a swarm of bees.

But when I slap a yak or two on the roof, road warriors back off. They apparently fear I might launch a ground-to-ground kayak missile if I slam on the brakes. And they'd be right – when it comes to tying expert knots, I’m not. California kayaking river ocean lake
Posted by Glenn Brank at 5:09 PM