After more than two seasons of kayaking, I recently took my first class on the forward stroke. It was basically an act of desperation, after tendonitis in an elbow kept me off the water for two months. My goal was to spot one bad habit in my stroke that might have put the hurt on me. Found at least three points to correct, so I hope an ol' paddle dog can learn new tricks.


The place was Lake Natoma, at the Willow launch near Folsom, and the small class was run by kayak pro and blogger Bryant Burkhardt, who provided on- and off-water instruction – plus video to show us the error of our ways. And it was very effective. Bryant noted that paddling a kayak is not unlike swinging a golf club. Almost anyone can do it, but to do it well requires a series of subtle moves and good form – and even pros need coaching to stay sharp.

Our afternoon session kicked off with an armchair overview by Bryant, who described the toe-to-hip zone for maximum paddling efficiency....

There are tons of texts and videos on paddle technique, of course, but by the end of the day, my classmates and I were convinced that there’s no substitute for a hands-on class to improve your stroke. And watching yourself on video really helps spot problems and work on corrective steps. Even small adjustments can make a big difference when you multiply them by hundreds or thousands of paddle strokes. 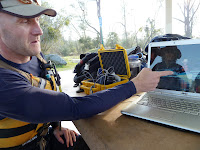 Three points that really stuck with me:

First, as Bryant described it, it's crucial to get the blade into the water ahead of your body. And if the blade does not pop up by the time it’s in line with your hip, you’re wasting energy and possibly risking shoulder injury.

Second, get the paddle shaft up to head height, away from your body, and keep it there, to maintain proper stroke form. Most of us seemed to drop the paddle too low at some point in mid-stroke. California sea kayak paddle

Third, think of the paddle as an extension of your torso. Power generated by rotating your upper body – not your arms – creates the most efficient force to move the kayak.

* * *
This half-day class was sponsored by the Sacramento store of California Canoe and Kayak. Check the CCK class calendar, or touch bases with your own local dealer or kayak club for a class in your area.  While hands-on is the way to go, you might buy a video for additional reference. There's a popular DVD by Brent Reitz.