The sweetest slough beckons you

(One in a series of "A" list kayak trips in Northern California.)
MOSS LANDING -- The 200-foot-tall industrial stacks that loom over this tiny community don’t exactly belch smoke signals that say, “wildlife preserve and kayaker paradise!” But this unlikely landmark leads to Elkhorn Slough, one of my Top Ten kayaking trips. It’s a sanctuary for sea and river otters, seals, herons, cranes, and other waterfowl, and a wonderland for kayakers who respect the environment.


Moss Landing is just north of the City of Monterey, a fairly easy, 3½-hour drive from Sacramento. In summer months, temperatures are a welcome 30 to 40 degrees cooler than in the sizzling Valley. The Moss Landing Harbor has low-cost public parking, restrooms, a small but easy-access launching beach, and a first class, full-service kayak dealer – Monterey Bay Kayaks. Headquartered in Monterey, it maintains a satellite store in Moss Landing that offers sit-inside and sit-on-top yaks for sale or rent. For the latter, a full day of paddling is a bargain in the $30-$40 range -- including all the gear and advice you’ll need from the friendly and professional staff.

A locally-owned restaurant, the Sea Harvest, sits above the harbor for convenient, post-paddle refreshment. And on the dock below, piles of harbor seals serenade kayakers as they paddle under the Highway 1 overpass and into Elkhorn Slough. A Top Ten kayak experience? Easy call to make! 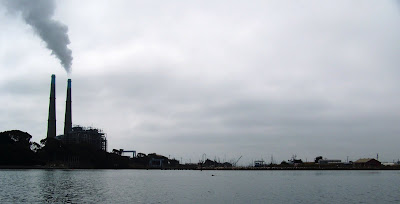 From the harbor, Elkhorn Slough extends more than six miles north-northeast and is part of the Monterey Bay Marine Mammal Sanctuary. As such, there are off-limits areas for humans, both on land and in the water. Yakers are cautioned not to exit their craft until they reach Kirby Park, about four miles upstream. And all human visitors must keep a reasonable distance from the permanent residents. Even so, I saw more wildlife and more varied wildlife here than any place I’ve been on the coast.

Most of the wildlife action occurs within two miles of the Moss Landing Power Plant and its giant stacks. Their billowing plumes have earned nicknames like “cloud factory” and “fog factory” since the facilities were built by Pacific Gas & Electric in the late 1940s. Thankfully, the massive gas and steam turbines generate no smell or noise over the slough (though release of heated water into the harbor has been an issue in the past). But unless you’re looking directly at the plant, you'll soon forget it’s even there.

Typical coastal conditions prevail. The water is cold. On the August weekday when I paddled, the day began cool and foggy, cleared to brilliant sunshine by 11 a.m., and by noon, an offshore breeze of 10-15 mph worked with the incoming tide to push a dozen or so kayaks up the slough. That’s the crucial point to paddling here – catching a high tide on the way in, while minimizing exposure to afternoon sea breezes on the way back. Even with a five-foot-plus tide, I noticed areas where the water was still only a foot or two deep. And the mud below is true, deep goo. Step into it, and you’ve really mucked up, so to speak. Fortunately, Monterey Bay Kayak’s excellent Web site includes a link to a current and tide chart. And store staff can help confirm your plans and calculations. (See “launch lines” below.)

Sound a bit tricky? No worries. Just stay alert, take the standard safety gear, and bring paddle clothing suitable for changeable conditions. (Monterey Bay Kayaks provides and requires wetsuits for rental kayakers.) If you’re into photography and new to the slough, some of your best shots may be taken on land, from the Moss Landing State Park’s sandy bluff. On the day I was there, two dozen sea otters lolled about, oblivious to tourists and the gulls that hoped for a snack from the otter’s catch of the day. 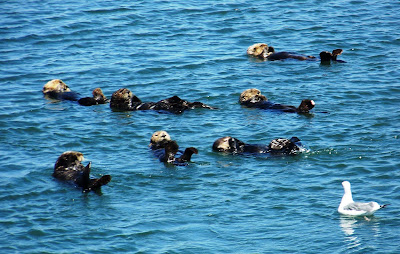 Seals were everywhere. They’ve commandeered harbor docks, to the chagrin of the local fishing industry. Further into the slough, they flop on the muddy shore, resting against tall blond grass. Some may choose to frolic with kayakers, defying the marine laws passed to protect them. For 20 minutes, one young seal “raced” me up the slough, leap-frogging out of the water. Despite my efforts to steer clear of him, he stayed close enough for me to hear the snort of his breath with every acrobatic leap before he finally disappeared – and then I realized he was making “torpedo runs” just under my bow. Show-off!

Soon after, I spotted a river otter – smaller and darker than its saltwater kin – and this one was a mom. Floating on its back, it licked and groomed a wriggling, rat-sized pup. The three of us rocked gently in the emerald green water, bathed in afternoon sun and framed by patchworks of quiet farmland. On the horizon, rolling coastal hills rose to meet cloudscapes and blue. It was the kind of day that you wish would never end.

For a good overview of Elkhorn Slough, link to this map.

Moss Landing is on Highway 1, about a 30-minute drive north of Monterey. It's a quaint and quirky place with a good vibe, from the Thistle Hut produce market (hey, this is the artichoke capital of the world) to the Big Enchilada restaurant to the pearl dealer who sells from a roadside van. Just after you pass the giant stacks, you'll cross the overpass and see Elkhorn Slough on your right. Once off the bridge, a large parking lot can be seen on the left. The Sea Harvest restaurant is near the bridge. Turn at a large outdoor pottery shop and behind it you'll find the docks, launch beach and Monterey Bay Kayak. Public parking just yards from the beach costs less than $5.