(Another in an ongoing series of "A" list kayak trips in Northern California.)

FOLSOM – It was pitch dark – where the devil is that full moon? – and my kayak was just rounding the island when I heard it. Something big in the water. Very close. Uh-oh, and more than one thing out there. My grip tightened on the paddle.

Then came a softly inquiring honk. Canada geese! Their shadowy profiles emerged just off the bow. So I “honked” right back at them. They veered and as my kayak glided by, I gave them another honk that said, “You guys don’t own Lake Natoma tonight.”

It was one of several full moon paddling trips this summer run by California Canoe & Kayak, a local dealer that also operates out of Oakland. CCK introduced me to kayaking, and Lake Natoma is my home yak base. Among more than a million other people, I live within about a 30-minute drive of this small lake that also acts as the spigot between Folsom Reservoir and the lower American River.

Talk to kayakers about Natoma and someone will probably say, “Yeah, it’s a nice paddle, but it gets boring.” Well, they’ve never paddled after dark – this one easily made my Top Ten list. At the same time, this is NOT a paddle to try solo. Even if you’re very familiar with Natoma, it’s an entirely different experience at night. Stuff can happen. On one moonlit cruise, strong winds arose unexpectedly and whipped up a chop worthy of San Francisco Bay. Our CCK group, using light sticks to keep track of each other, crossed the lake together without much difficulty. But on the way, we encountered some other kayakers who seemed clueless as to the potential hazards. One floated alone in the dark, gabbing on her cell phone – not cool at all.

CCK requires its moonlight paddlers to show basic kayak skills, and carry the usual safety gear under the supervision of paddle leaders. And most CCK moonlight kayakers have gone on “night maneuvers” at least several times, so more experienced hands are always ready to help newbies. (Our regulars have an informal social group called the Tribe – more on that in future posts.)

With or without wind, Natoma moonlight paddles are a blast. One evening, we cruised to the “Big Pipe” just before sunset. Golden beams of fading light shot through the trees and played their magic on the water. The “Big Pipe” – which also serves as an overpass for the American River Bike Trail -- leads to a water diversion area near the south end of the lake. It’s a marshy, mini-ecosystem with deer, heron, and other wildlife, and it could pass as the swamp in “The African Queen” (sans leeches and Bogie) or the home of “The Creature from the Black Lagoon” (sans gill-man). 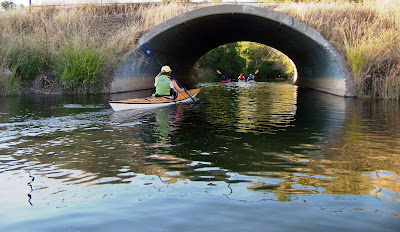 On another moonlit evening, we paddled to the north end of the lake and met a family of beavers who slapped the water with their tails to signal that they had the right of way. Then we cruised up toward the hillside of Folsom – and beyond, up the narrowing channel and mini-canyon leading to Folsom Prison. With almost 6,000 cubic feet of water per second rushing from the reservoir, I could barely fight the current long enough to catch a glimpse of a guard tower and bright prison lights. (Just as well, since there’s a point where a warning sign says go no farther, and the prison guards mean it, say friends in law enforcement.)

Then it was time to turn and drift back into the lake under a canopy of twinkling stars, serenaded by chirping crickets along the shoreline and the quiet rhythm of paddlestrokes in the darkness.

LAUNCH LINES:
Lake Natoma, near Highway 50 just east of Sacramento, is part of the Folsom State Recreation Area. The lake is about 7 miles long and perhaps 250 yards at its widest point. It also has a 5 mph speed limit, so it’s ideal for kayakers. The 32-mile American River Bike Trail skirts Natoma on the way to Folsom Lake.

Moonlight paddles are run by California Canoe & Kayak at Lake Natoma on a monthly basis from spring through fall, and also into winter, weather permitting. CCK also obtains special permits to keep a lakeside parking lot open late for moonlight trips, as the lot closes at 9 p.m. to regular visitors. CCK is a first-class, full-service dealer -- check its website for an interactive calendar of trips and classes including a weekly "social paddle" on Natoma. (More about good kayak dealers in future posts.)
(c) Glenn Brank 2009
Posted by Glenn Brank at 9:04 AM