ENGLEBRIGHT LAKE – With the spring runoff spigot turned on full blast, it seemed like a great weekend to explore a foothill lake. What we didn’t expect was a hidden gem – a paddler’s paradise tucked away in Nevada County. Modest it may be, but still an “A” list kayaker spot in my book. 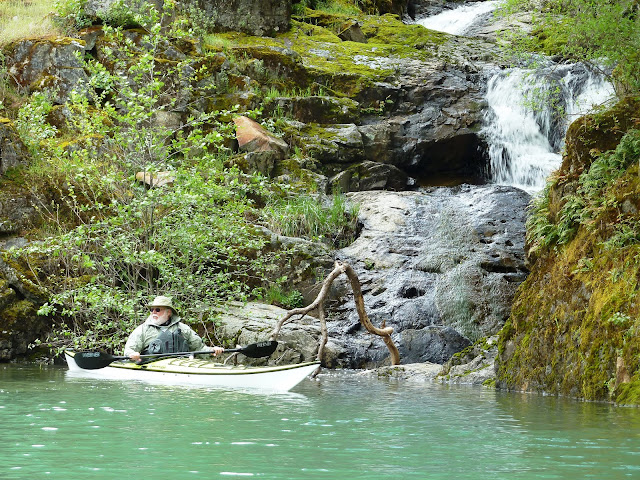 And a tip of the paddle to NorCal Yak pal Dale (above), who arranged this ten-mile, Easter Sunday trip. We found a fantasy land of turquoise water set against steep, green hillsides with “spontaneous” waterfalls fed by spring showers. Wild iris, lupine, and blue bells dotted the shore. And most of the time, we had this reservoir in the Yuba River Gorge all to ourselves.

The temperature was in the mid-60s with occasional light showers – “soft weather,” as the Irish say. Englebright could easily pass for a remote area of  Ireland in the spring, yet it lies only about 75 miles north of downtown Sacramento. It’s an easy, interesting day drive. And as a bonus, there’s boat-in camping. (See “Launch Lines” below.)

A caveat: As the season progresses, water levels may drop and weekend visitor traffic surely will increase. At an elevation of only 550 feet, lakeside temperatures will rise as well. Most of the reservoir is open to motorboats, and summer weekends may get busy and noisy, we learned at the local marina. So primo paddling season is now, with weekdays as an alternative later on.

We launched from the Narrows Ramp near the dam, at the south end of the lake. There’s another ramp nearby at Skippers Cove Marina. The area is home to a virtual village of houseboats that range from funky to near-fabulous. But for the most part, there are few signs of civilization along the rest of Englebright’s 20-plus miles. In most places, the lake was less than 200 yards wide and obviously high from runoff. 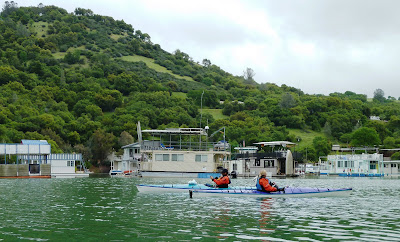 Which provided the main attraction. While the falls weren’t Yosemite-sized, they were incredibly beautiful and accessible by yak. The steep hillsides were so lush that we usually heard the falling water before we saw it. Small streams cascaded between moss-covered boulders and stair-stepped their way into the lake. 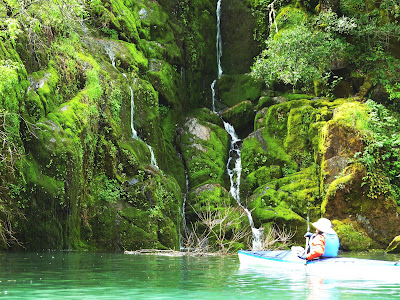 Our dream spot was under a tree canopy, on the eastern shore in the vicinity of Long’s Point. Water came down the green slope in rivulets, and black butterflies danced overhead as we took photos of each other at water’s edge. And more photos. Still, we knew that nothing could truly capture the magic of this place and moment.

There are about 100 campsites along the lake, many with spectacular views. With high water, we had no trouble cruising up to within ten feet of a picnic table at Buck’s Beach, about five miles from the launch. Part of an “A” list paddle involves the intangibles off the water – a small group of good friends, simple food that hits the spot, the greenest canyon in all creation, and awesome cloudscapes billowing overhead.

Turning back after lunch, we found another waterfall, much larger than the first, that we had heard but completely missed seeing on the paddle up. Yep, the hillsides are that lush. This spot, across the Upper Boston campground, also afforded a view of massive rocky outcroppings in the canyon walls. (See video.)

On the paddle back, we peeked into several coves and ravines that begged for further exploration. But after about five hours on the water, only a couple of us were up for a detour. Besides, it gives us something to look forward to on another trip to Lake Englebright.

From downtown Sacramento, Lake Englebright is about a 1:35 drive via Marysville and Highway 20, with good scenery on the two-lane stretch between Marysville and Smartville. However, be careful not to run off the road while gawking at the replica of a three-horned Triceratops dinosaur in a front yard near the intersection of Highway 20 and Spring Valley Road. Google directions.

Skippers Cove Marina is under new ownership. At the marina store, the friendly, helpful owner welcomed us, offered visitor tips, and made it clear that kayakers are welcome. You can also inquire about houseboat rentals.

Print the marina's map of the lake as a general guide.

Englebright is administered by the U.S. Army Corps of Engineers. Day use parking for kayakers is $4 per vehicle. First-come-first-served camping costs $15 a day. Campsites look well-maintained, and pit toilets are provided.
Posted by Glenn Brank at 3:48 PM