Update 5/29/15: While the white Sierra peaks are now down to snow-cone levels, water clarity is wonderful. More new photos online at  http://1drv.ms/1SHDdo6

A bit less water, but it's clearer than ever

It’s still the most spectacular alpine lake a kayaker could ever hope to paddle. So just think of Lake Tahoe as downsizing a little bit during California’s record dry spell.

Earlier this month, three of us headed up the hill to enjoy Tahoe views while some snow still dusted the peaks. We weren’t disappointed, although the lake had dropped perhaps six or eight feet from its usual spring level.

On the plus side, Tahoe beaches are longer and wider than ever. On the minus side, that may mean some walking to haul kayaks down to the waterline. On the plus side again, water clarity is better than it’s been in years, thanks to less runoff from the hillsides.

So is Tahoe’s glass half empty or half full? Go see for yourself, and soon. I’ve never been disappointed by a kayak trip here.

Paddling conditions should be fine through June, before the Fourth of July crowd begins to swarm over the area. Then it might be best to wait til the fall frost drives them away.

We kicked off our day trip near the South Shore, from the Baldwin Beach parking lot that reopened on May 1. A mid-morning launch offered mild conditions and almost no wind, as is usually the case on Tahoe.

Once on the water, the only reminder of drought was a long stretch of shallows, with sunlight glinting off rocks and sand below, before we finally hit that drop-off point where mysterious, deep blue water awaits. It never fails to awe and inspire.

By that time, we were perhaps half a mile offshore with a line-of-sight heading toward the southern point of Emerald Bay. A leisurely pace across gentle swells took the 1.8 miles or so in about 45 minutes.

Just at the mouth of the bay, we spotted an osprey perched high in a dead tree with an enormous nest. After a while, it became clear the nest was occupied, and when the osprey’s mate flew in with a fish lunch on the talon, we could hear the hungry cries of hatchlings. Bald eagles sometimes stake out the other side of the bay as their turf, but we saw none on this particular day. 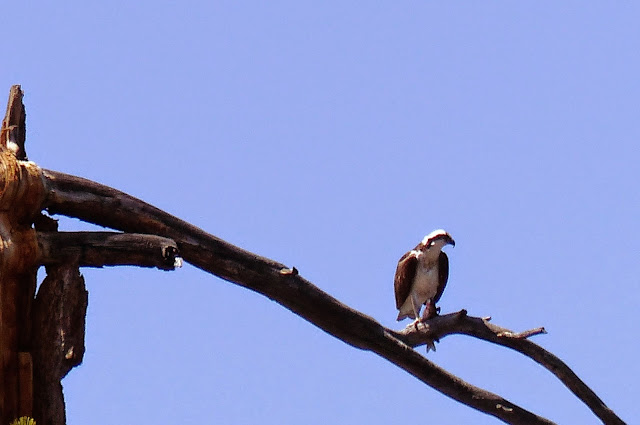 It’s deceptively far into Emerald Bay's picnic area -- about 1.5 miles -- almost equal to the paddle over from Baldwin Beach. Along the way, we observed the lower waterline "bathtub ring" around Fannette Island and a picturesque boat-in campground run by State Parks.

We also noticed that Eagle Falls, which usually emits a splashy roar this time of year, seemed more muted. That drought thing again.

But it was altogether a beautiful day, the kind of day where clear blue skies merge with clear blue waters and make you appreciate all that kayaking and nature can offer. May Tahoe be forever so.

Depending on how closely you follow the shoreline, a round-trip paddle from Baldwin Beach to the back of Emerald Bay is a bit more than seven miles. On this paddle, an impromptu afternoon side trip from Baldwin south to Camp Richardson added another three miles round trip. It also brought up an interesting point about kayaking on a "downsized" Tahoe.

During the paddle to Camp Richardson, winds began to rise from the northeast. Afternoon winds here are routine, often from the southwest. But the situation now is that shallow water extends farther out into the lake than it has in years.

And shallow water produces more wave action. On this day, sustained winds of 15 mph, gusting to 21 mph, really stirred things up on the return leg.

It was an exhilarating paddle, but only in a well-equipped sea kayak with cockpit skirt and safety gear. In other words, get off the lake early in the day if you’re looking for a relaxed experience or paddling a smaller rec boat.

Another reason to paddle early in the day, especially on weekends, is to find a parking space in the paved lot at Baldwin Beach. It’s on federal land and there’s an $8 daily use fee and a staffed kiosk where the attendant will ask you if your boat has been cleaned. That’s a serious issue due to several non-native marine invaders that threaten the lake.

One other note on Baldwin Beach: We agreed it had some of the best public restrooms ever visited. Now this was only the second day that Baldwin was open for the season, but let’s give credit where it’s due: flush toilets (powerful, too), good ambience (sky lighting), spacious seating (so to speak) and very clean. Five stars (or golden potties) awarded.

For more info on Tahoe paddling, refer to these NorCalYak posts:

D.L.Bliss State Park, Vikingsholm mansion, and the Chipmunk Gang
(Bliss will open for the season later this month; Vikingsholm tours begin May 23 and run through September.)