LAKE TAHOE – The third time was the charm. For the last two seasons, poorly timed paddling trips to "Blue Heaven" left me unable to explore Fannette Island – Lake Tahoe’s only isle – because it’s reserved as a bird sanctuary for part of the year. The retreat was reopened to public access on June 15.


Last weekend, three of us launched from D.L. Bliss State Park and paddled south past snow-capped Sierra peaks to Emerald Bay and this tiny fantasy island. A bit of background: Until the 1950s, Emerald Bay State Park was privately owned and served as the setting for Vikingsholm, a Scandinavian-style summer mansion. 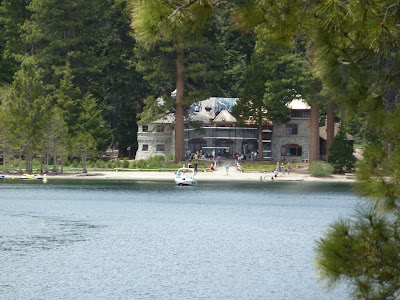 The mansion was built in 1928-29 by a wealthy Midwesterner, Lora Josephine Knight. A charitable benefactor and member of high society, she spent entire summers at Vikingsholm, where notable guests included Will Rogers. At her direction, a tea house was built on the island for their enjoyment, and it probably offered the highest “high tea” in the world at an elevation of 6,300-plus feet. A staff of servants helped ferry guests to and from the island and served elaborate meals in the mansion.

There’s no formal transport to the island these days. Some people anchor their power boats a few yards off the rocky point and swim the chilly water. Others paddle inflatable rafts or small plastic kayaks that can take a pounding on granite boulders, since there is no beach and the depth drops off sharply.

For the three of us – all paddling expensive and relatively fragile composite kayaks – landing was the most challenging part of our visit. We found a semi-promising spot on the northeastern side. My paddling pals opted to go “on the rocks,” while I sidled up next to a large fallen tree that extended from the shore about 30 feet out into the lake. Looked like a natural dock, but the phrase “as easy as falling off a log” soon came to mind. My companions took unseemly pleasure in watching me crawl over the slick tree trunk.

A few minor scratches later – to legs and kayak hulls – we made our way toward the mini-summit. The island really is a bird sanctuary, if the amount of aviary poop is any indicator. Covered the rocky surface in layer after layer. Thankfully, it was thoroughly dried by sun and alpine air. It also helped explain how a fair amount of vegetation could survive on this solid granite atoll. 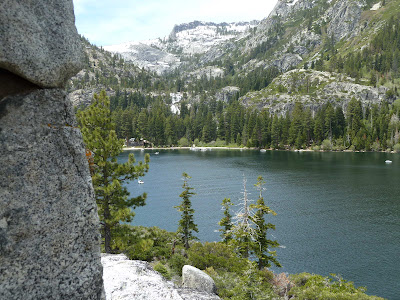 The climb up to the tea house was short but brutal – and well worth the effort. At the top are gorgeous views of the bay, Vikingsholm, and Eagle Falls, which cascades down the slope above the mansion. A parade of powerboats and paddle wheelers passed across sparkling blue water below us. 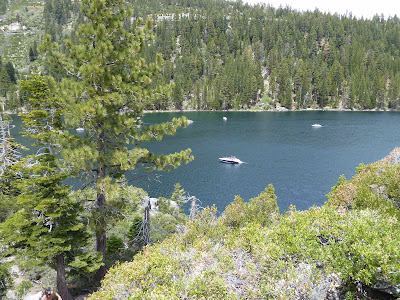 While Vikingsholm has been preserved and features daily tours, the tea house is a ruin with four stone walls open to the sky. A tiny fireplace nestles in one corner. Not surprisingly, every window opening has a great view. While it’s now only a stone shell, the tea house maintains an air of cultured dignity, a tiny monument to an age of immense wealth and gracious living. A far cry from what “tea party” means to many people today.

For details on D.L. Bliss and Emerald Bay state parks, see the "Blue Heaven" link at the beginning of this post.

Long before the rich and famous came to Fannette Island, a colorful character called the atoll his own.

Lake Tahoe's greatest asset is the clarity of its alpine waters -- but they are threatened by invasive species. Quagga and zebra mussels hitchhike on boats and pose a serious danger to Tahoe's clarity and ecosystem. While there are no current restrictions on kayaks, you can help -- bring a kayak that's clean, and help keep Tahoe's water clear.