From rocks to riches, another side of Tahoe paddling

Sand Harbor: Boulders sliced, diced and polished by thousands of years of wind and water...

Meeks Bay, mansions:  These people earned it. Why, some waited years for their inheritances and stock options...


Every California kayaker should try to make it up to Lake Tahoe at least once a year. My fave Tahoe paddle is the incredibly scenic route from D.L. Bliss State Park to Emerald Bay and Fannette Island.  If you’ve been there and done that too many times, there are interesting alternatives.


Let’s begin on the Far Side, with apologies to cartoonist Gary Larson. Californians and Nevadans may not see eye to eye on much, but we share America’s premier alpine lake. And the view from both sides of Tahoe is spectacular, which takes us across the border and south of Incline Village to Sand Harbor.


This 55-acre Nevada state park offers a long, white sand beach and seems geared toward family-oriented recreation. It’s also the perfect place to do some flat water rock gardening in an environment that’s kayak-and-paddleboard-friendly – up to a point. 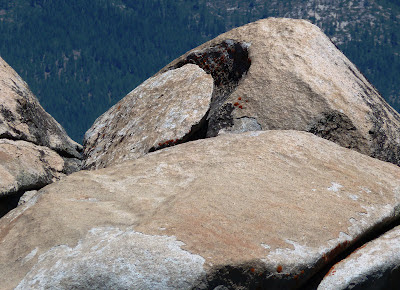 First, the good: Easy highway access to the park. Convenient parking and launching for kayakers (providing you get there early in the day). A professional, friendly park staff. Tahoe’s typically blue and beauteous water, of course. And other scenery that rocks, literally. Huge granite boulders extend from the shallows out 60 yards or more into the lake.

You could spend at least a couple of hours exploring these mini-islands that have been sliced, diced and polished by thousands of years of wind and water. Reddish-orange lichen and the markings of time decorate the granite. Rock-scapes visible from ten to 30 feet below the clear water are pretty amazing, too.
More time, other sights? NorCal Yak pals who’ve done the paddle tell me it’s an easy 1.5 miles or so to the Thunderbird Lodge, a grand old mansion built by one of the lumber barons whose fortune literally grew on trees harvested from the area.
Now the bad stuff: Most of the park is barely a stone’s throw away from busy Highway 28, so heavy traffic noise reverberates from the eastern slope across the lake. As the day goes on, the water gets noisier. Sand Harbor is a popular spot for jet skiers who seem to enjoy spinning donuts, à la NASCAR, as well as high-power ski boats a bit farther offshore.

Of course, montorized activity creates some playful waves for kayaking, too –an upside if you can tune out all that revving.

Regardless, let’s give Nevada some props for providing a first-class public facility that was actually open to the public in mid-June. Especially since a trip to “our side” of the lake the next day found the gates closed at D.L. Bliss State Park. 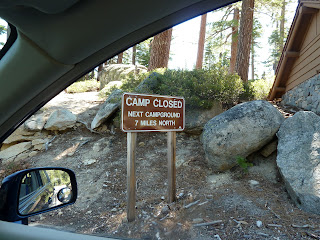 Yes, the delayed opening (June 15) was announced on an internet sub-page for Bliss at the California State Parks site. But it never occurred to me to check – geez, this was June, after all.

A park old-timer told me he couldn’t remember another year when Bliss opened so late. (State parks blamed budget cuts for the late opening, but the parks budget has since become emboiled in a scandal.)


So, a short drive back up Highway 89 to Meeks Bay Day Use Area where the launching was easy (parking about 50 yards from the beach) and fee reasonable ($7 for day use). Plus, this paddle provided a different view of Tahoe's California side, one that most of us don’t get to see. Because most of us don’t own a fabulous lakeside home that blocks public access.

Yes, these are one-percenters. And the crème de la crème of old money have summer homes at Tahoe. Like the Morgans (as in J.P.) and the Johnsons (as in Johnson &). But don’t get me wrong, no sour grapes (’47 Bordeaux). These people earned it. Why, some of them waited for years to receive their inheritances and stock options.

So think of the 2.2-mile cruise from Meeks Bay down to D.L. Bliss as sort of your tour of homes of the rich and famous – just don’t get carried away and tie up to one of those private docks flying the American flag. Because this land isn’t your land, and this land isn’t my land.
Also, no one up here seems to have heard about the real estate crash. The sounds of power saws and hammers reverberate out a couple of hundred yards into the lake as new mansions rise near the shoreline. Or as the locals say, “The hedge fund managers are back in the ‘hood.”

D.L. Bliss was really quiet that day, its beach deserted. So it was just like owning a private estate at Lake Tahoe -- I even had to shoo away a flotilla of Canada geese that had no respect for my privacy rights.

Now that it's open, D.L. Bliss can expect overflow crowds every weekend and some weekdays til closing on Labor Day, Sept. 3. But at least it’s there for the 99 percent. And seeing it again renewed my appreciation for public parks. This land – and water – was made for you and me.

Paddleboarding and kayaking seem to be on the upswing at Lake Tahoe, based on my informal observations during the last couple of years. The Truckee Sierra Sun reports that paddler perks are expanding.
Check for more info on Sand Harbor of Lake Tahoe State Park (Nevada) and D.L. Bliss State Park (California). For Sand Harbor kayaking, go directly to the marina entrance (with its own admission fee kiosk). Cost is $12 for a vehicle and kayak ($10 for Nevadans). There’s a temporary pullover specifically for kayakers next to the boat launch ramp, and easy beach launching. It gets crowded early in summer months – get there by 10 a.m. to assure yourself a parking space.


One other random note: If you pass through Tahoe City, stop by the tiny Coffee Connexion, next door to the post office in the Safeway plaza on the main drag, for some of the best java you’ll sip anywhere. Bring your own cup and it only costs a buck.