It was my second lesson in river kayaking, and instructor Thomas Schuebel had guided me into an eddy just below the San Juan rapids on the lower American River near Sacramento. A guy with a small inflatable raft was hanging around at the shoreline. We soon realized something was wrong.

Across the river, perhaps 40 or 50 yards away, stood a kid, age 12 or maybe 13. Waist deep in cold water, just out of the swift current. He clutched a flimsy blue tube, the kind used in a backyard pool. And he wore no life vest. Thomas was casual but direct – did they need assistance? The older guy was embarrassed but clearly helpless to reach the kid. And I was about to see some expert kayak control in moving water.
~ ~ ~
Thomas, a certified kayak instructor, starts with basic concepts to teach paddlers how to work with current instead of fighting it. The ideas seem simple but are essential to paddling in moving water, as a couple of pals and I had learned a few days earlier. 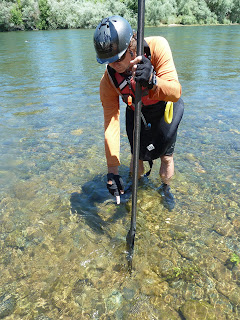 Thomas first took us to some shallows to introduce the concept of eddies – flows that develop just downstream from a rock or other obstruction. Slip into an eddy and you encounter a vacuum that moves your kayak upstream, against the current. A perfect spot to rest or assess your next move, and it’s all about fluid dynamics – but unfortunately, I must have slept through that particular day in science class.


No matter. Using his paddle blade in the river shallows, Thomas created mini-eddies as we dropped twigs into the swirling water to duplicate the movement of a floating object. Much easier than trying to figure it out while spinning around in a 17-foot kayak, we agreed.

For several hours, we practiced entering and exiting eddies and other basics of kayaking in moving water. There was “spawning” – pointing the bow exactly into the current, and suddenly finding ourselves nearly stationary with practically no effort to needed to stay there. Way cool. Then we began to identify and approach eddy lines – the borders between eddy and current – and use them to spin and change direction with minimal paddle effort.
It was such an interesting lesson that I went back to the river with Thomas a few days later. After some review, he introduced me to “precision ferrying” – going sideways in a swift current while staying on a straight line across the river. Required some serious focus, and left me wondering, do I really need this? The answer came a few minutes later, just downstream at the San Juan rapids.
~ ~ ~

Someone said that when you handle the current well, it’s like being a graceful dancer. Thomas did just that, shooting straight across the river to the kid in less than a minute or so.


Like his companion, the kid was a bit embarrassed. But when Thomas asked him if he could swim, the answer (“Ummm…ummm”) was less than reassuring. So Thomas hooked the kid’s pool float up to his kayak and towed him back across the river to rejoin his companion. No big fuss, no big drama. But a good lesson, for sure. (See VIDEO.)
LAUNCH LINES
Austrian-American Thomas Schuebel, now based in the Nevada City area, has worked as a guide and trip leader on four continents. He is certified by the American Canoe Association as a kayak instructor. Contact him at 530-575-1652, email thomasschuelbel@sbcglobal.net Or go to Facebook and check out his page.