‘Tis the season for waterfalls and wildflowers. April usually brings a boatload of scenic kayaking to Northern California, and Jenkinson Lake was the destination this year. Some NorCal Yak pals led a recent Sunday paddle to a beautiful waterfall at this well-maintained, multi-use recreation area near Pollock Pines.


We pushed off from Stonebraker Launch and tootled around the main part of the lake for an hour or so. In this dry year, the shoreline already has that “bathtub ring” but thickly wooded areas add a softer touch to the scenery. Plus, it’s quiet this time of year – another advantage to April kayaking. A 5-mph speed limit on the northern side of the lake doesn’t hurt, either. We saw only a couple of fishing boats as we cruised toward the dam and backtracked along the shoreline.

Some NorCal Yak pals who had paddled up here just a week earlier guided us up the narrow end of the lake, where we pulled out for lunch in the tall grass followed by a short (four-tenths of a mile) walk through an evergreen canopy to the lake’s premier waterfall.

What a surprise! Even with limited runoff, the falls were two stories high and at least 12 feet wide, and they cascaded off the rocks into several mini-falls. There’s nothing like the low roar of rushing water and the gentle kiss of a cool mist to soothe the soul. And there was comfortable seating, with boulders flattened and polished by centuries of rushing water.

It was the kind of place where we could have spent an entire day and we probably should have. But there were a few other places to explore – including the inlet leading to the falls. We got less than 100 yards upstream before low water and bumpy rocks convinced us to fall back with the current. Our trip -- around the lake and the waterfall walk -- covered 5.5 miles according to my GPS, but the variety of paddling and walking made it seem like we had covered more distance.

Owned by the El Dorado Irrigation District, Jenkinson Lake is part of the Sly Park Recreation Area and little more than an hour's drive from Sacramento off Highway 50. Check the official link above along with EveryTrail for other details. Day use fee is $11, or $9 with the geezer (62 or older) discount. Ask for a map of the lake and trails at the Jenkinson ranger kiosk.

Here are some other prime spots for waterfalls and wildflowers from April kayaking trips in recent years….

Lake Berryessa is one of those gems hidden in plain sight, also called Solano County. It tends to drop quick as the temperature rises with the Bay Area’s thirst, so April is probably the best month for wildflower tours via kayak. The lupine and iris displays can be spectacular.

The Pope Creek area is a prime spot, and it’s adjacent to a 5-mph zone that favors paddlers. Later in the season, the Bureau of Reclamation has begun sponsoring kayak tours that spotlight wildlife.

Over in Nevada County, there’s a double-shot of fall and flowers at Lake Englebright. An Easter Sunday paddle in 2011 evoked memories of an Irish spring with its “soft weather” – light rain showers interspersed with overcast skies and sun – and a waterfall around every bend in the narrow lake.  Begorrah, that was one fine day. 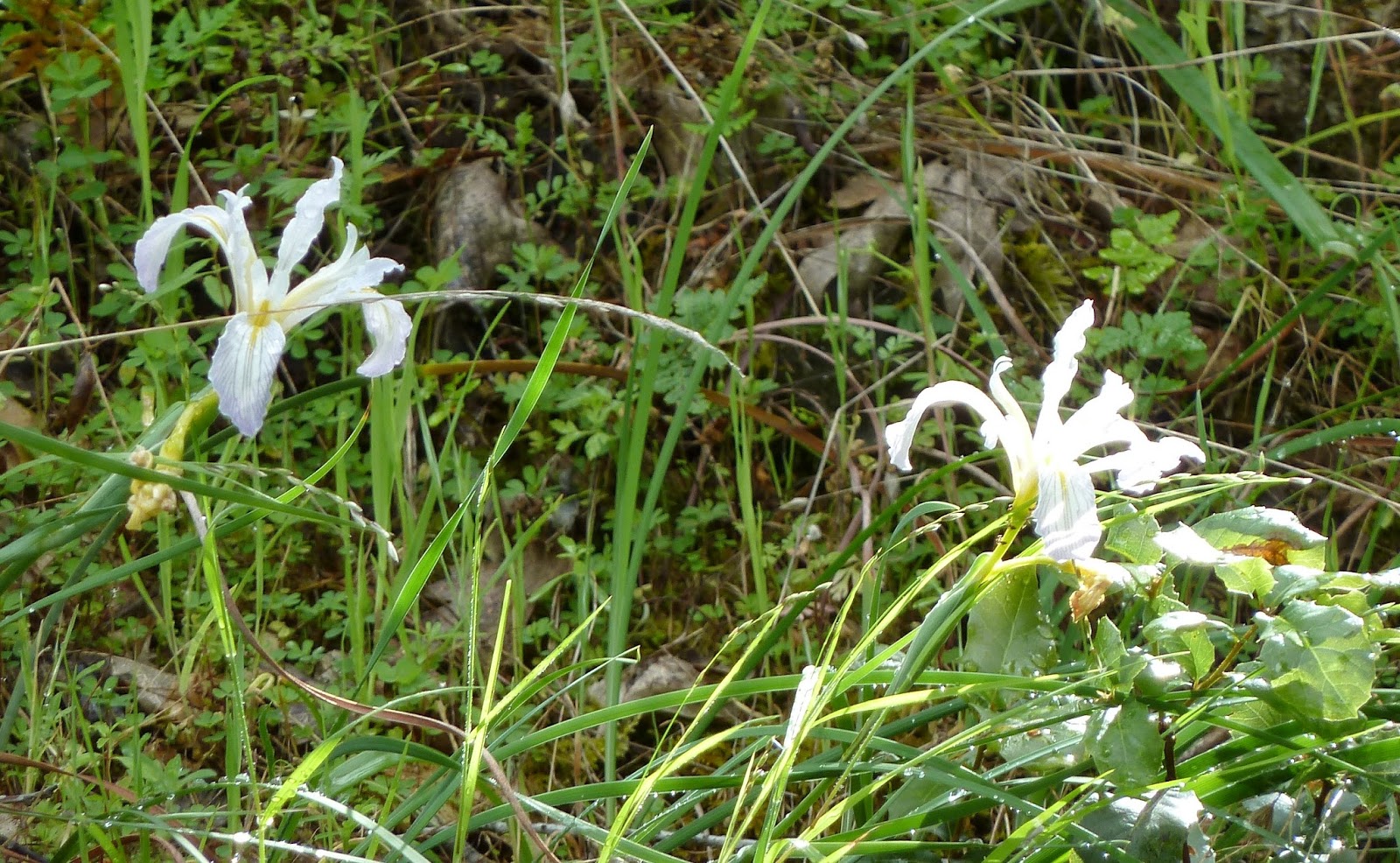 While the falls weren’t Yosemite-sized, they were incredibly beautiful and accessible by yak. The steep hillsides were so lush that we usually heard the falling water before we saw it. Small streams cascaded between moss-covered boulders and stair-stepped their way into the lake.

Finally, don’t forget to look close to home for that spring fling. Take Lake Natoma (part of the Folsom State Recreation Area) near Sacramento. If you launch from Negro Bar just

below the Town of Folsom, you can paddle upstream to a point just below Folsom Prison (“Hello, I’m Johnny Cash”) and enjoy spring bouquets popping right out of the granite cliffs.

There are also several small, spontaneous waterfalls here in spring. I used to enjoy them greatly until a NorCal Yak pal who happens to be a water scientist told me that these mini-falls originate from lawn sprinkler runoff, street side car-washing and the like – or as he called it, “urban drool.” 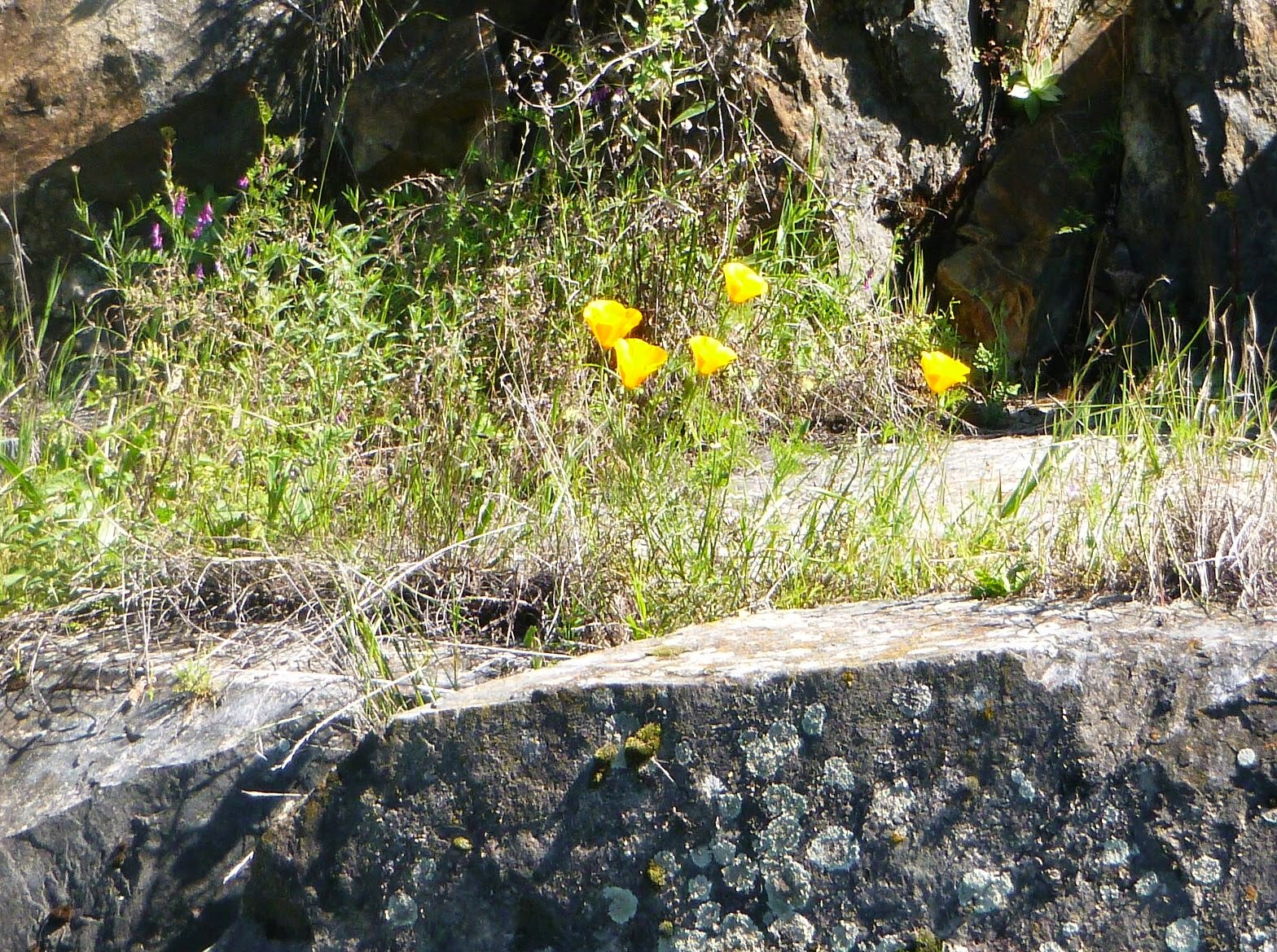 Well, that kind of spoiled the mood….but on the other hand, we all need to remember that water is a precious commodity in these dry times. And if we want to enjoy future spring waterfalls and wildflowers, we ’d best conserve as much water as possible to keep our environment healthy.