Another way to look at places we paddle

“It’s a small world, but I wouldn’t want to have to paint it,” said comedian Steven Wright. On that note, meet Dave “The Rave” Edwards, an outdoors enthusiast and friend of NorCal Yak. Dave is a photographer, traveler, and former whitewater kayaker.

Dave was doing me a favor recently – totally unrelated to kayaking – when I mentioned NorCal Yak. He saw my post on a video of Upper Cherry Creek. Turned out he knew quite a bit about the place as a hiking destination. “My wife and I have been going to Upper Cherry Creek for 25-plus years. It’s a very special place,” said Dave. kayak trips 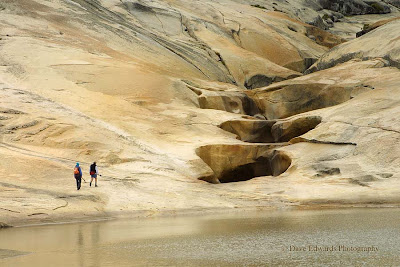 “I have to confess that we were somewhat disheartened when it was ‘discovered’ ten years or so ago by the paddling community,” said Dave. “I never thought it would be
paddled – equipment and skill certainly caught up to it – not to mention that it really is a heinous hike/carry to get in there. The kayak run is orders of magnitude beyond my abilities.” (Photos of Upper Cherry Creek in non-paddling season, courtesy of Dave Edwards: the “Teacups” in the fall of 2006, sunset and shadows across peaks around Upper Cherry Creek, and another “Teacups” view, below.)

Dave stressed that Upper Cherry remains “a great place of course!” But human traffic has changed this unique environment and its sense of wildness. New trails have appeared, camp sites have been built and "improved." And several videos have been shot by professional kayakers, involving multi-day encampments for film crews with assorted technical people, porters and groupies. Slings and platforms have been used to position cameras for the best video angles. California kayak trips

It left me remorseful for casually promoting that video, though Dave was quick to add that Upper Cherry has become so well-known that it doesn’t matter. Even a sandal company has co-opted the place. Still, it gave pause. And if that sounds strange from a blog focused on kayaking destinations, hang with me. I’m never sure exactly where this blog's going, but we’re making good time. 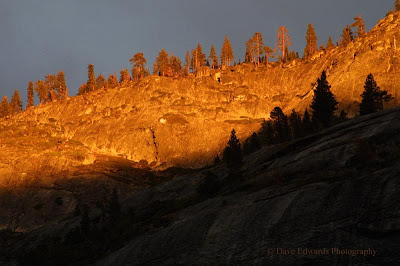 I recently got into a fruitless discussion about another stretch of water on the East Coast. A world-class paddler had just kayaked it for the first time – illegally. I grew up near that place, and argued that the feat would just inspire other, less qualified paddlers to try it and risk injury or death. I now realize that I was wrong. It's not paddlers who need protection – it’s places like Upper Cherry Creek.

You can’t protect people from themselves. (Brank’s Second Law states that when some yahoo yells, “Watch this!” just stand clear before calling the ambulance.) But we can and should protect nature from selfish paddling. Every time we needlessly disturb wildlife, or paddle into a sensitive, off-limits area, it chips a bit away from what makes some place special. 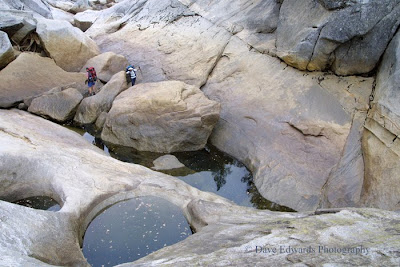 How could minor transgressions really hurt? Because it is a small world – thanks to communication, travel, and technology – and that gives us boats and gear to take us places we once couldn’t go or didn’t even know existed. Today, there’s no such thing as a single set of footprints anywhere.

Wear and tear on a “small world” of beautiful, natural places can’t be excused by selfishness, any more than slapping on a coat of paint can hide damage to the environment. We can only show a true appreciation for our paddling adventures by demonstrating respect for the places that made them possible – a world that’s often beyond description in words. And on that note, thanks for the photos, Dave.