FALLEN LEAF LAKE, El Dorado Co. – Waves and whitecaps. One of Lake Tahoe’s little alpine sisters was in a really foul mood for a Sunday morning in August. Which was sort of how we felt, too. We’d planned a Tahoe paddle for weeks, only to lug 16 kayaks up a trail to get slapped in the face with 25 mph gusts. And cold, since the wind came courtesy of an Alaskan front. 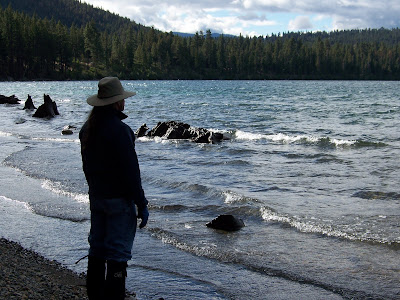 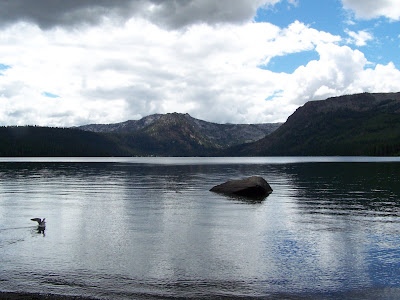 Less than three hours later, the lake would seem as smooth as glass, and we’d be happy paddlers. But at that moment it looked grim. Only 20 minutes earlier, our group was milling
about the general store at Camp Richardson, a short drive from South Lake Tahoe. Some rousted themselves out of bed at 4 a.m. to be there by 8. Others spent the previous night, and a chunk of change, at local motels. The day had dawned with some partial cloudiness and virtually no wind, seemingly perfect for our planned paddle to Emerald Bay. I had lobbied for it since my own paddling trip there in June.

Then Cap’n Bob arrived with the yak trailer and announced that high winds and rough weather were forecast within the next hour or so. We couldn’t believe it, but settled on Fallen Leaf as a backup, since it was smaller and more sheltered by the mountains. Only a few minutes later, reality and a razor-sharp wind arrived.

For the next hour or so, we watched waves pound the shore and whitecaps dot the lake. It was a spectacular setting, but not quite what we expected. So we stood, shivered, and hoped it might let up. Talk turned to breakfast in general, and the lemon-poppy-seed pancakes at the Camp Richardson café in particular. Then several in our group decided to venture out to determine whether we should stay or go. Personally, I was in the pancake column. 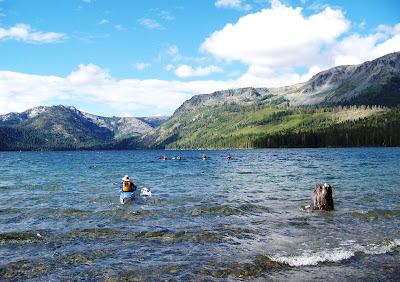 We watched our pals bob and bounce toward the resort on the far side. Fortunately, a couple of them were extremely strong and experienced paddlers. Another 45 minutes or so passed, and while the wind still cut like a cold knife, the waves began to subside. So three of us decided that lake conditions could be downgraded from “foolhardy” to just “slightly stupid” – and off we went.

The first pleasant shock was the water – it actually felt warm. Then we noticed that a few hundred yards out, the wind seemed much less gusty, though choppy waves kept us focused. Still, the scenery was just magnificent. Clouds, water, and terrain blended into a Sierra-scape of beauty beyond belief. 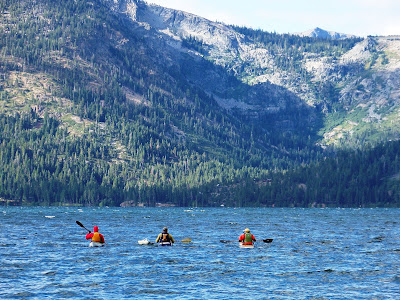 We paddled to the resort and slightly beyond, a distance of nearly three miles, while keeping a lookout for the advance pod. On the way, we window-shopped for summer cabins and boat houses that ranged from old and funky, yet appealing, to the Sunset-magazine-three-stories-high-with-a-deck-and-pier places, even more appealing. Yet it was graciously agreed that we could accept any house here for free, even if only for a weekend. 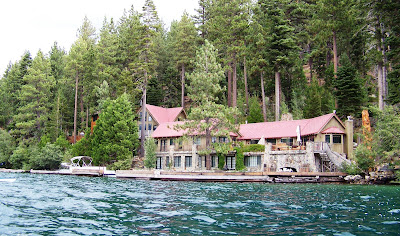 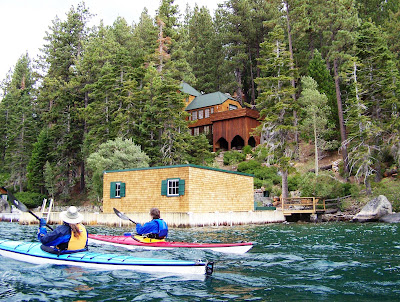 The other paddlers soon appeared on their return leg, and we paddled back together. Of course, with the wind finally at our backs, the gusts eased up. Heavy clouds billowed overhead, and in the far distance, we could see Lake Tahoe being thrashed by rainstorms. I still yearned for pancakes, but as compromises go, this paddle was a great one. 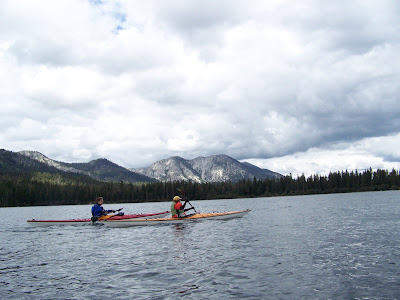 Earlier in the day, two swept-wing military jets had roared over the lake in close formation, apparently on their way to an air show in South Lake Tahoe. We got our own, unexpected show on the return paddle as a single-engine pontoon plane came in low, then performed a touch-and-go over our left shoulders – putting an exclamation point on an extraordinary paddle. 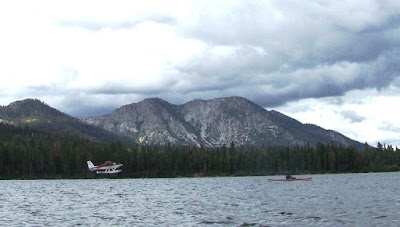 For some of our group, that still wasn’t enough. Having grown accustomed to the threatening skies, they drove back to Tahoe in mid-afternoon for a paddle to Emerald Bay. I’d had enough for one day and returned to South Lake Tahoe, where I stopped for coffee, sat in my car in a hailstorm, and wondered what was happening out on Tahoe.

My pals later reported they were out on the lake when thunder began rumbling, and they beat a retreat to shore and safety. Which once again proves Brank’s First Law, which applies to kayaking, gambling, and beverages: You know your limit just as soon as you’ve passed it. My friends were lucky that Mother Nature let them off with just a warning – though it couldn’t have been for good behavior.

Fallen Leaf Lake is about one mile southeast of Lake Tahoe, off Highway 89 and about a 20-minute drive from South Lake Tahoe. Fallen Leaf is within the Lake Tahoe Basin Management Unit of the U.S. Forest Service. There is a particularly detailed description of the area on Wikipedia. Also check info on hiking and camping at a government site.