Mud paddling the next big craze?

MOSS LANDING -- Could the next big craze in kayaking be…mud paddling? Kind of like “dirt biking” without wheels? Nah, but it sure looked that way on a recent return trip to Elkhorn Slough here in Monterey County.

This trip was with the Tribe, a group of Sacramento kayakers who came for a weekend paddle at the slough and in Monterey Bay. And since we had all the right gear, a couple of seasoned ‘yakers and a favorable tide, we decided to explore the marshes and backwater channels. Once into the marsh grass, however, it was difficult to see where shore ended and water began. In fact, there were times when we got a bit lost, or as one paddler put it, “We’re making good time -- we just don’t know where we’re going.” Like a corn maze, minus the maize.

Even with a five-foot-plus tide, it was way too easy to miss a tight turn and meander into shallow water. Slough mud is deep and treacherous – as I found out when I tried to push myself off a mud bar with my expensive paddle, then watched it stay stuck in the ooze as my kayak began floating away. Exiting a kayak that’s run aground is not an option, unless you want to be chest (or neck?) deep in stinky mud -- and lose your footwear in the bargain.

However, the experience is more interesting than just paddling up the slough’s main channel. On this day, the marshes featured dozens of snowy white egrets close at hand, plus the occasional dive-bomber pelican in search of fish. Fall is the best time to view migratory waterfowl in this region. Though we had no expert birders in our group, there were a couple of old coots who shall remain nameless. 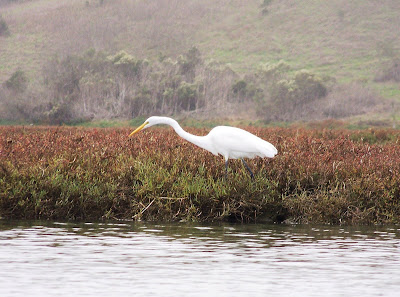 Exploring the back channels of Elkhorn Slough is not a paddle you should attempt alone, or with other novices, so check with Monterey Bay Kayaks for a guided tour if you can’t join some kayakers with experience here. (For more info, refer to “The sweetest slough beckons you”.)
Posted by Glenn Brank at 7:56 PM