Every day, tens of thousands of people in Sacramento drive over the American River. Little do they know about the environment that lies just below the stream of urban traffic.

A short, easy kayak trip along the American near downtown Sacramento is perfect for that sunny, late-season weekend when you have a few hours to spare. Our November paddle began near Howe Avenue and ended 11 bridges, 8.5 miles, and three hours later at Discovery Park, where the American converges with the Sacramento River.

As a bonus, we enjoyed an “underview” of 11 bridges while paddling the final stretch of one of the finest urban parkways in California, if not the West. (NorCal Yak plans to include a full-length paddle of the American River Parkway as a future “top ten” paddle trip.)

River current on this stretch tends to be more leisurely in November than at some other times. But snags and shallows and a few good-sized riffles could take an unwary kayaker by surprise. Not to mention that late-autumn air temps in the 50s to low 60s seem fine for paddling but feel much colder after a flip-and-dip in the river. So wear a personal flotation device, as always, and go with a group – preferably including someone who’s paddled this stretch of the American before. You’ll want the companionship anyway, since a vehicle shuttle is required if you can’t arrange for pickup at the Discovery Park pullout.

After passing under the Howe Avenue bridge and past a futuristic-looking water treatment plant, we floated under the Guy West Bridge at California State University, Sacramento. This pedestrian bridge (below) is a real gem, a one-tenth scale model of the famed Golden Gate. Built in 1966, it was named for Dr. Guy West, the first campus president. It’s the smallest span on this trip and the most elegant by far. 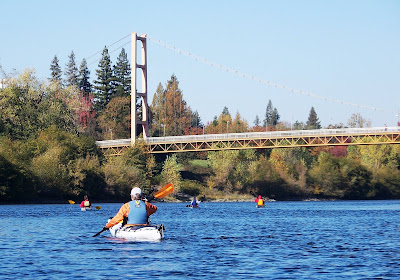 Looking up from the water at Guy West and the nine remaining spans, it’s amazing to realize that all were built within the last century or so. Before then, the American River was more of an obstacle than an urban playground. Back then, folks paddled this river out of necessity, not for recreation.

For example, take the H Street Bridge (also called the J Street Bridge and the American River Bridge at H Street). It wasn’t built until 1932, though other spans preceded it. According to a recent article in The Sacramento Bee, this was roughly the spot where Gold Rush-era folks forded a shallow spot in the river.

Today it’s a four-lane span to upscale suburbs. Old concrete abutments under the bridge look ominous – like the lairs of river trolls. But any mythical monsters must have been snoozing on the Saturday morning when we quietly glided by.

Further downstream, past the Capital City (I-80 Business) freeway bridge, are three railway crossings – the old Southern Pacific and Western Pacific lines, plus a pedestrian/bike bridge that once carried the Sacramento Northern. It was an electric railroad that once ran all the way to Chico, say transit historians, who note these rail lines created the first permanent crossings of the American in the early 20th century. A fact probably lost on graffiti artists who have decorated the foundations more recently.

Nearby, tucked into the shadows of the busy 16th and 12th street bridges, is a little riverfront neighborhood complete with docks, decks, solar panels and a houseboat or two. Most of the residences are mobile homes, though by the look of things they’re not moving anywhere. Only two minutes from downtown Sacramento, it’s the perfect urban hideaway. Someone should open a dockside coffee bar here.

At this point, the river begins to widen and slow like a western replica of the Mississippi. Canada geese patrol the riverbanks and fly overhead in formation. A few turtles sun themselves on snags near the bank. Could it really be late fall? Most of our paddlers have already shed jackets and weekday cares. 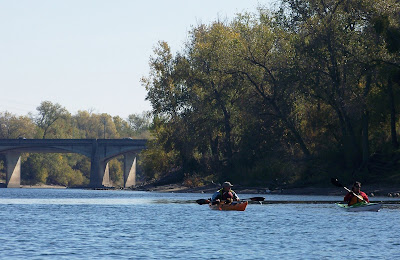 All that’s left before us is the massive I-5 overpass -- its concrete trusses reinforced by the mud nests of swallows -- and the 1930s Jibboom Street Bridge that crosses the river at Discovery Park. It’s the perfect ending to this bridge paddle tour – old and new, side by side.

Okay, while you can drive over or paddle under these bridges without paying any tolls, Sacramento County Parks charge $5 a car for parking ($8 on holidays), plus $3 for small craft launching. One payment covers all county parks for a day. Keep the receipt on your dash. (Note that park attendants seem nice enough and should not be confused with trolls.)

Also consider joining or contributing to the American River Parkway Foundation. All of our parks need and deserve public support.