A billowing black cloud of feathers rose above as I paddled on an ebb tide....

...in Tomales Bay one recent morning. Hundreds of birds – probably thousands – filled the sky in a spectacular aerial display.

Until that moment, it had been a disappointing kayak exploration of back bay marshes in search of waterfowl. Though it seemed a perfect winter morning for birdwatching, as temps quickly warmed into the low 60s under sunny skies and light breezes. The
unruffled water was quiet with almost no other boat traffic.  But overwintering waterfowl were scarce and skittish. Only scavenging gulls – chickens of the sea – and cormorants were evident in any numbers.

Then, as the tide turned and the wind picked up, the black cloud appeared from nowhere.
Photos and video of the scene hardly do it justice. If I read my bird guide correctly, it was a massive flock of bufflehead ducks, with a smattering of common goldeneyes.

When they finally settled on the water, the flock created a feathered island that stretched nearly across the bay from the Inverness Yacht Club to the opposite shore, perhaps more than half a mile. And they seemed oblivious to the sudden chop as tide and wind clashed and rocked my kayak like a carnival ride. 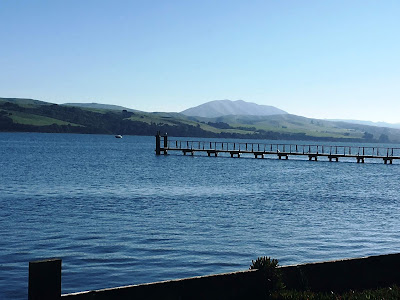 Such was a day in this “other season” of Northern California kayaking.

With or without bird life, there are ways to enjoy a quiet coastal paddle in winter. On this particular day in early February, a “king tide” made it possible to navigate much farther back into the bay than usual, with some familiar Tomales Bay landmarks along the way.

The century-old “launch for hire” boathouse, listed on the National Register of Historic Places, is one favorite spot best seen from the water. Not open to the public, it’s sometimes used for private art events. Nearby lies the “S.S. PointReyes,” the most-photographed symbol of Tomales Bay. It's showing its ribs these days, having been battered by decades of wind, water and human visitor abuse.


Even old boat wrecks look good in the right light, and that’s early or late in a day on the bay. But it’s usually best to paddle early or not at all.

And whatever the forecast, keep an eye on the weather in any season.

The morning after the bird storm, winds picked up early across the ridge above the Tomales Bay Resort, where I like to launch and stay overnight.

That's also where I once encountered an old salt who offered me some good advice. When sailboat masts and yardarms in the resort's marina begin to chime, he said, stay off the water – there’s a strong blow coming down the bay.

And so it was the second day of my visit. I lashed my kayak to the roof of my car and packed up to return another time. Then I watched as others ignored those wind chime warnings, but I doubt they’d do it again.

(The National Park Service provides some helpful links and info for this area, which is part of the  the Point Reyes National Seashore. Birds of Northern California is my favorite birdwatching guide. Check tide info here. P.S. My apologies to any chickens who were offended when I compared them to gulls.)