Mendocino County is a prime NorCal Yak destination this summer. No question, there’s beautiful scenery and a great variety of paddling venues. But it's also about who you meet along the waterline, and a recent weekend jaunt produced chance meetings with two remarkable characters who share a love for fishing.

Introducing Rodney, a fisherman who wins the Prize for Wack Yaks. Rodney’s ride came off a trash pile in Malibu 25 years ago, he said, though it really doesn’t look quite that new. A neighbor discarded the boat after cutting up the deck to carry scuba tanks, only to realize that it wouldn’t float with so much extra weight. Duh.
Rodney rescued the hulk, then glued on plywood hatches to make the craft more, uh, seaworthy. He regularly paddles out along the rugged coast to fish or dive among the jagged rocks, seemingly without worry. His fave story about the one that got away? A mako shark that towed him around for hours in Southern California. At one point, he said, it came up under him like a submarine.


The day after the monster broke off his line, Rodney got a call from a friend who had retrieved his lure after catching a 700-pound shark. It's a nearly unbelievable story, but coming from Rodney, it sure seemed right. And if Wack Yak could only talk, who knows what stories it might tell?

Later that day, we were leisurely paddling up the Albion River when another angler caught our attention. The Albion is locally famous for its floating cottages, but we had never seen anyone at home before. This time, a river otter was lounging on a porch. He was ready for a snooze in the sun but distracted by a hard-to-reach itch. (See video.) 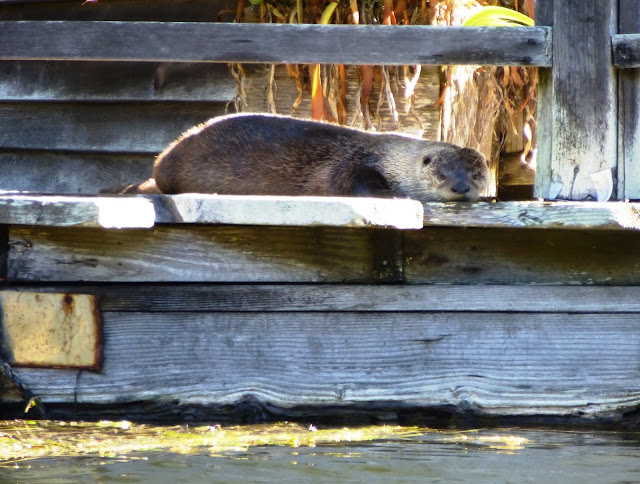 I’m always been fascinated by river otters, and had never seen one out of water for an extended time.  Adorable -- he preened and posed for the camera, a shameless ham with whiskers.  Though my younger bro, who once worked at a nature center, held a different view after giving a river otter its vaccination: “Ever try to hold a 30-pound rotating circular saw at high speed that won’t turn you loose, all the while emitting a deafening screech?”

Well no, bro. But I kept a respectful distance from this one, whom I called Al (short for Albion).

Al and Rodney shared an admirable quality aside from their happy-go-lucky attitudes and their angling skills.  Both fit perfectly into their environment. What good luck to meet these Mendocino locals who seemed so right at home.