Paddle Mendocino in a day, the Noyo way

9/13 update: "Tracks to Kayaks" is back in business on the Skunk Train line.

Mendocino County is a paddler paradise – more than 75 miles of coastline along Highway 1, plus five large tidal rivers over almost 3,900 square miles. You could easily spend a week kayaking on just the most accessible waters. But let’s get a flavor of Mendocino paddling in just a few hours. No way? Noyo way!

The Noyo River channel cuts through Fort Bragg like a lumberjack’s chainsaw. By turns it’s gritty and green, a flowing embodiment of contradictions that are so Mendocino. In a distance of less than four miles, paddlers get a feel for paradise, paradise lost, and most everything in between.


The Noyo also is home to "Tracks to Kayaks," an unusual paddler tour offered by Liquid Fusion Kayaking. The local outfitter came up with a family-friendly kayak trip down the river, using the historic Skunk Train as a shuttle. Uh, one problem this season. A recent tunnel collapse on a key stretch of track between Fort Bragg and Willits. No casualties, but the 128-year-old railroad is on life support.  Meanwhile there are plenty of other paddle tours and classes available from Liquid Fusion. (See “Launch Lines” below.)

My pod paddled up the Noyo late in April, unaware of the rail mishap, even though we passed less than 50 yards from one end of the tunnel. This was our second springtime trip, and I had low expectations, based on the previous paddle. Boy was I wrong. (Okay, “wrong again.” Geez.)

In 2012, we arrived at the harbor late on a Friday, then paddled off tired from the drive and low on the tide. Didn’t get too far upstream, didn’t see that much, and after kayaking later that weekend on the Albion, aka the "River of Dreams," the Noyo barely got into a NorCal Yak post. Fast-forward to this season, a sunny morning and a high tide. This time, the Noyo showed its best, if quirky, side.

First, we lucked into Jeff Laxier of Liquid Fusion. Jeff knows the Noyo like his backyard. Because the Noyo is his backyard, as Liquid Fusion’s shop is just a few paddle strokes from the best kayak launch point in the harbor, a secluded sandy beach.

Noting that the tide was still rising, Jeff advised us to first paddle seaward through the harbor, waiting for the peak flow upstream. We did and it did. And in the process, we caught a glimpse of Mendocino history, more than 100 years packed into less than four miles of river.

Noyo is a working harbor. Which means if you’re kayaking, get the heck outta the way as fishing boats power in from the sea. We followed them – and flocks of hungry seagulls – to the docks. It’s a raw-knuckle place, equal parts smell, rust, rot and salty sweat. And the rugged survivor of many storms, thanks to deep-set cliffs and a beefy breakwater.


We watched a fishing boat crew swab the decks as a couple of seals eyed us. Meanwhile, seagulls swirled and darted like mosquitoes around a sea lion as it gulped down a fish nearby. Going with the upstream flow, we passed more a dozen well-worn RVs and trailers perched at river's edge. Most seemed to be losing the battle with salt air and rust, but what a great spot for fishermen on a skimpy budget.
Further upstream, we encountered the first of two spans over the river, part of an old logging road. When I asked Jeff of Liquid Fusion about it, he said it was the old A&W Haul Road. Like the root beer? Oh yeah, said Jeff, noting it once connected to a street with a guess-what drive-in. 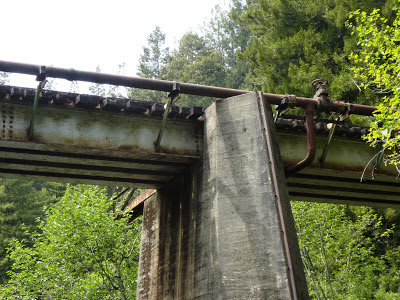 By the time we reached the next bridge, the water was mere inches deep. This is the No. 1 Bridge, said Jeff, a train trestle for the Skunk Line leading into the ill-fated tunnel. An old  pipeline runs over the trestle and was once used by a “debarking" operation. Loggers literally knocked the bark off trees with water pressure, part of the North Coast’s fallen timber industry. Today, the pipes carry Noyo water to replenish a nearby creek.
The riverbed deepened just past the bridge, and we paddled on to encounter a deck jutting out over the water and a residence largely obscured by foliage. A sign on the deck left some paddling pals befuddled. Their jaws dropped when I explained the reference to firearms. No tall weeds in sight here, but sure as shootin', the spirit of the Wild West still lives on with some Mendocino "farmers" and other folk who just like their privacy.

It seemed like a good place to turn around and head back to the harbor. The Noyo wins a spot on my "A List" because it showcases the offbeat, rugged beauty of the North Coast in a way that even novice kayakers can enjoy.
LAUNCH LINES


Liquid Fusion Kayaking, located in the farthest back corner of Noyo Harbor, offers kayak classes and tours from “dry and mild” to “wet and wild” with Jeff and his partner Cate

Hawthorne. They are North Coast veterans and well-regarded in paddling circles. Tip: If you’re planning a Mendo trip this summer, check their schedule and book early. Cate also writes an excellent blog, Woman on Water.


The Skunk Train, rumbling the rails since the 1800s, is running a limited route this year while working to raise $300,000 to repair its collapsed tunnel. Find the train schedule and learn how to make a contribution  on the homepage.
NorCal Yak is dedicated to the proposition that a great kayak outing should be followed by a great meal, preferably at a local joint with some personality.  Piaci Pub and Pizzeria fits the bill perfectly in Fort Bragg. It’s small, cramped, noisy, and wonderful – pizzas are creative and flavorful, and the crust about as perfect as it gets.