Tale of a whale, with video tips

Only a week or so after paddling Tomales Bay in November, I saw an online item from a kayaker who had just spotted a young gray whale there. Well, I thought, it was probably just a fluke. (Warning – bad puns ahead.)

But the whale stuck around and has been seen by a number of kayakers. It’s rare to find a gray so close to shore in Northern California. And it’s a lucky and skillful paddler who happens to be there with a camera at the ready. But enough spouting off. (You were warned.) Click on the title or double-click on the video screen to expand it....


The kayaker behind the video is R.C. Mallory, an East Bay paddler who got into kayaking about three years ago. He's a member of Bay Area Sea Kayakers (BASK) and the Petaluma Paddlers. “I try to get out at least once a week, usually with the Petaluma group, because Tomales Bay and Drakes Estero are my favorite local places to paddle and observe marine life,” he told NorCal Yak. (There's another good YouTube video by Mallory on leopard sharks in Tomales Bay.)

News reports said the young gray, at an estimated 25 feet long, might have moved into the area in search of food in the shallow waters and seemed unfazed by boaters and kayakers. However, marine authorities caution to always keep a safe distance of at least 300 feet, and that's about the distance from which Mallory shot his video with a zoom lens.

For us amateur paddler-photogs who blubber about missing good shots (yeah, whales and puns really blow), Mallory offers some basic tips. “I am finding that to get good action shots, you just have to keep the camera rolling – use a big SD card and edit out the excess later.

“For something like a whale spout, you'll miss it in the two seconds it takes the camera to roll, so if have to anticipate when the action is about to happen, and keep the camera on. As you can tell from my videos, I am still in the very amateur stage….The trick in any case is to hold yourself stable with one hand on the paddle, and shoot with the other.”

But realistically, your best chance to view gray whales – migrating south in the late fall to breeding grounds in the warm waters of Baja California – is standing on high ground, such as the bluffs on nearby Point Reyes, or from whale watching boats that may cruise five to seven miles offshore. March and April are usually good months on the Northern California coast for the northbound migration, with cows and calfs moving slowly and closer to the coastline. Last year proved to be exceptional for whale-watching, from grays to humpbacks to the giant blues. (Photos below taken from a tour boat on Monterey Bay, July 2010.) 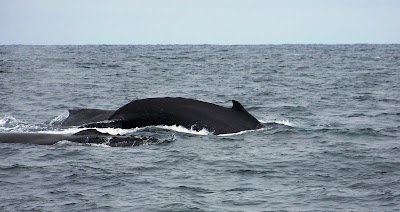 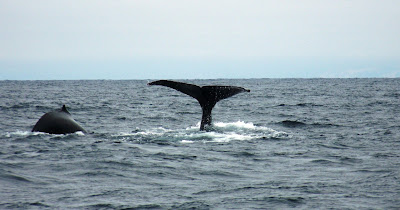