The chalky cliffs of White Gulch loomed ahead as we paddled across Tomales Bay. Behind us lay rolling hillsides of Marin County, a lush green blanket draped over a giant named San Andreas. sea kayaking ocean paddle

It’s not every day that you paddle over a fault line that’s gradually relocating a major chunk of California real estate. In the process, millions of years of geology have been compressed into 12 miles of coast. And on this day, Tomales offered a more instantaneous, awesome power display in the form of tide and wind that tossed and turned our kayaks like autumn leaves.


Marine buoy data showed bay winds were approaching 18-22 mph about the time this video was shot during the return leg of our eight-mile roundtrip. So this was not a relaxed paddle, but it was true to time and place – a cold and windy Sunday late in November, and an estuary on the North Coast. Fortunately, our group of a dozen kayakers had a seasoned trip leader, Bryant Burkhardt, and his crew of three capable paddlers. (Check Bryant’s thoughts on paddling under these marginal conditions at his blog.)

The day began bright and breezy at low tide as we launched from Miller County Park at Nick’s Cove, near Marshall. In the face of a 10-mph wind, we angled our way over past Hog Island to White Gulch. It's a popular Tomales paddling route that also offered shelter while Bryant gave us a mini-briefing on the geology and biology of the estuary. Then we paddled up the shoreline while scanning the Point Reyes ridgelines for tule elk and the bay shallows for harmless leopard sharks. 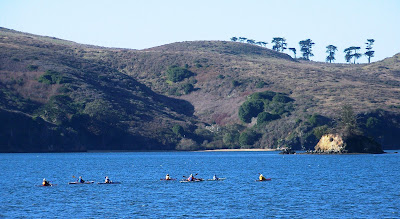 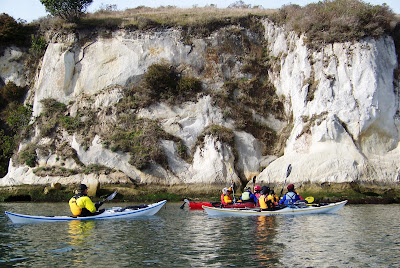 On this day, the predominant wildlife included several great blue heron that perched near the shoreline and seemed oblivious to humans thrashing around in kayaks below. We saw nary an elk, though it's common for kayakers to spot dozens of them. What we did find were other paddlers – two groups of them – and we finally gave up looking for our own private beach to share a stretch of sheltered sand with another paddling pod. 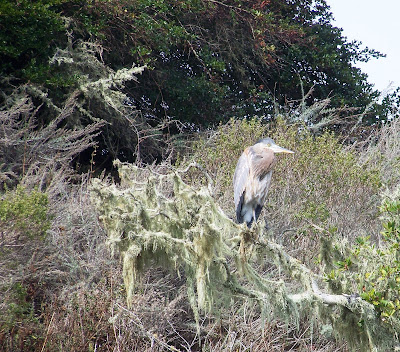 Landing on the beach, we had to sidestep jellyfish, some the size of pie plates, in what looked like the aftermath of a Jello factory explosion. Further down the strand, large jagged chips of granite stuck out of the sand like giant sea monster teeth, interspersed with starfish and sea anenome. 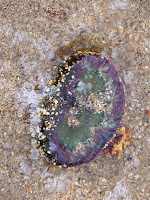 Some of our group chose to return to Nick's Cove after lunch as wind and tide began to rise. The rest of us plowed ahead for another two miles or so to a point where we could see Bodega Bay in the distance and feel the quickening pulse of  wind and waves. We "rafted up" our kayaks and seemed to bob in place.

Then a buoy about the size of a gallon jug came whizzing by, headed out to sea. For a few seconds, I thought, gee, it must be snagged on a very large fish, and then it hit me. The buoy wasn't going anywhere – it was us, being swept back into the bay by the incoming tide!
On the rollercoaster ride back to our launch point, NorCal Yak pal Dale spotted a four-foot leopard shark. I knew he was telling the truth, because he momentarily stopped worrying about capsizing in the rolling swells.

Kayaker guidebooks and various online resources often refer to Tomales Bay as a good starting point for novice sea paddlers. But if you’re a newbie, it might still be wise to take your first trip with an experienced group or a professional kayak guide who’s savvy on tides and changeable bay conditions – especially during winter. Our tour was conducted by California Canoe and Kayak. Local area outfitters include Blue Waters Kayaking and Point Reyes Outdoors. (No personal experience with these outfitters.)

We launched at Miller County Park, on Highway 1 near Marshall. It has a floating dock, two paved boat ramps, and a paved parking lot suitable for trailered vehicles. There’s a $5 daily parking fee. Bring cash, since the credit card machine may be on the fritz.

Tomales Bay offers a number of cafes and restaurants that I’ve yet to explore. But if you like oysters, well shucks, check out the Hog Island Oyster Company, just a two-minute drive south from Nick’s Cove. It’s a well-organized bivalve biz with a picnic area and a spectacular view of the bay, on a nice day. Call ahead to check hours of operation in the off-season.