Ask paddlers what they remember about Lake Clementine….

…and chances are good they will answer “bubbles.” Clementine blows bubbles like a Lawrence Welk rerun. These airy pearls rise through sparkling clear water from a muddy bottom.

Which has led me to speculate, on previous paddles, that the bubbles may be fish farts. Except that at no time have I ever seen a single fish at Clementine, either swimming or at the end of a line, though fishing is popular here. This had the makings of a good mystery until one of my paddle pals – a no-nonsense woman who once worked as a rocket company exec – said flatly, “It’s decaying matter.” Well, okay, but she’s never going to get an invite from QAnon with that rational attitude.


Clementine, part of the Auburn State Recreation Area, is a great off- or early-season destination for kayakers, paddler boarders and canoeists. It’s usually quiet, almost too quiet. Except some years back, when my paddle pod came upon a forest fire in the making there.
Nicer surprises awaited on this trip in late February. Not halfway up the four-mile-long lake, two bald eagles soared around “Robber’s Roost,” a stagecoach bandit lookout point
in Western lore. It’s the only Clementine feature that rivals bubbles. Within a minute or two, the eagles  found a thermal updraft and spiraled ever higher,  accompanied by several turkey vultures and a hawk or two, against the blue-sky backdrop of a contrail. Let’s not get started on “chemtrails.”

lementine’s setting of clear water and thickly wooded hillsides, dotted by rugged rock formations and a shoreline of moss and ferns, is quite a pleasant paddle. At the lake’s headwaters, a rocky beach offers a picnic spot. But there are a couple of precautions to take at this picturesque lake. As the weather warms, Clementine attracts waterskiers. Then it can become downright dangerous, since the lake is no more than about 100 yards at its widest point, and there are blind curves. Lake rules dictate all boat traffic goes counter-clockwise as a sensible safety measure.

The second caveat is afternoon winds funneling up the Auburn Canyon on many days,  and the return leg of a paddle can be exhausting. Since February boat traffic was nil, I zig-zagged back down the lake to reduce distance and catch brief wind shadows. Another advantage of paddling during the “other season.”

s I paddled back to the launch, I scanned the sky for those eagles. They were gone but had been replaced by dramatic cloud formations, notably a boney “ghost fish” floating high over Clementine. Definitely the big one that got away.

Lake Clementine is part of the Auburn State Recreation Area.

In addition to the counter-clockwise boating rule, it’s worth noting that the steep road down to the reservoir is narrow, curvy and a favorite of bicyclists, so proceed slowly. 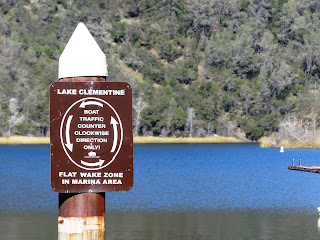 Day use fees are $10 for non-motorized watercraft and are enforced. There’s also boat-in camping, depending on the season and the Covid-19 status. See those links above for details. But also note that there’s nothing in the state park info about how Clementine got that name, though some government agencies may refer to it as North Fork Lake, which doesn’t sound nearly as romantic.

I searched far and wide but couldn’t find a clue, though the Western song classic “Oh My Darling Clementine” would seem a likely inspiration. Indeed, the lake was created in 1939 when a dam was built to contain mercury and other contaminants left over from Gold Rush days. Written the 1800s, the song involves a “miner forty-niner” and the drowning of his daughter. What was that about bubbles?