When it rains it pours, and when it pours, kayakers should think....

...long and hard before launching into storm-fed water. A few days before Christmas, a couple of Folsom paddlers launched their 10-foot recreational kayaks on Lake Natoma, just above the bridges and in the narrows that channel water releases from Folsom Lake.

The current was running close to 20,000 cubic feet per second – approximately the speed and power of your average freight train.

One of the paddlers wore his smartphone in a waterproof case around his neck. Its video
recorded the next 18 minutes, later posted on a Facebook page (but unavailable for public viewing, unfortunately). The kayak capsized almost instantly. Most of the
remaining video is a jerky mix of blurry water and blue sky with clouds, but it ends with the gasping paddler climbing onto rocky shore, amid a patch of poison oak, with water pouring out of his clothing. Close call? You betcha.

Earlier this week, a 70-year-old kayaker had to be rescued from the Napa River via helicopter airlift after his boat overturned and he clung to a log in 54-degree water for about 30 minutes. Although wearing a dry suit, “he seemed to be extremely cold. He couldn’t stand,” said a rescuer.


With another round of storms washing over Northern California this week, fast-rising rivers prompted warnings and closures.

The best kayaking strategy under these conditions? Stay off the water, say expert paddlers and public safety officials. There’s no shortage of safety tips on the Web, but here’s a fairly comprehensive article on flood water safety posted by Northwest River Supplies. It describes many ways to make fatal mistakes while paddling at flood stage. 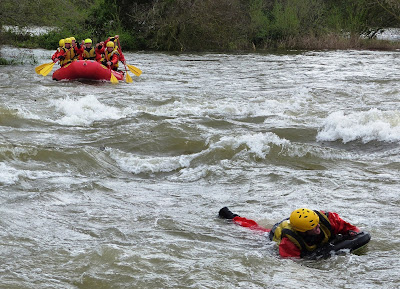 Early last spring, I happened upon a Cosumnes Fire Department flood rescue practice session in the lower American River. Conditions were similar to the present.

The group was very well-equipped, highly trained and skilled for the conditions. Yet it was striking how quickly things could potentially go wrong in the powerful, fast-moving current. At one point, a 30-foot-plus tree swept by, temporarily halting water drills.


Dangerous debris in high water from Glenn Brank on Vimeo.

Given current weather patterns, Northern California kayakers may enjoy great river paddling in just a month or two. For most of us, it might be well worth waiting for the water to go down a bit.