The kayak instructor’s question was an easy one for me…

Why did you want to take an introductory kayak surfing class? My instant reply: “In the early ‘60s, when I was a kid living 800 miles from the ocean and I heard The Beach Boys on the radio….”  Everyone laughed, but true. “Surfin’ USA” in 1963: ”If everybody had an ocean…” Ha! A kid in in the Appalachian Mountains could only listen to the radio and dream.

But 50-some years later, my dream finally came true with a recent “Introduction to Kayak Surfing” class at Dillon Beach, near the mouth of Tomales Bay.  My first run, from


about 50 yards out, was exactly the way I had always imagined. A large swell picked me up and fired me like a bullet to the beach without a wobble or a wipeout – wahoo!

Getting out there had been another matter. Our instructors had cautioned us to paddle past the “impact zone” of crashing waves as quickly as possible. For me, it became more of a “Maytag zone” – dunk in suds, agitate, rinse – and repeat. About six or seven times, in the form of waves that slapped me silly on the way to the “outside” where gentle swells began building.

As someone said later, “You’re a wave magnet!” But at least that first run didn’t knock me off my ten-foot-long, sit-on-top surf kayak, which felt more like a boogie board than a boat.

Lead Instructor Kelly Marie Henry explained that our small, surfing SOTs -- the Dagger Kaos brand -- were much safer for beginners, since we could easily pop out and resurface when we dumped into the churning water.

And once on a wave, all of us were able to maneuver our kayaks pretty well, after we got the hang of it. A lot of spills early in the session but all smiles by the end of the day, as Kelly had predicted.

A day of sun, sand, and surf, just like Brian Wilson promised in his lyrics. Okay, two out of three – it was a leaden-gray, foggy day – but that meant minimal wind, plus we had a glare-free view of a pod of dolphins playing in the swells not too far away. In fact, once we wrapped up for the day, they came right to the spot where we had been, as if to say, “Come back out and play!” Magical.


Kayak surfing has been around at least as long as The Beach Boys, but it has steadily evolved over the years. Today’s top-of-the-line pro boats are as light and sleek as sea kayaks, and a whole lot smaller -- much like instructor Kelly, a tiny young woman. (I didn’t know wetsuits came in a 00 size.) She also displayed incredible strength and athleticism as she helped us launch our boats into the surf. Both she and co-instructor Jennifer Yearley made surfing look easy in their sit-inside kayaks. 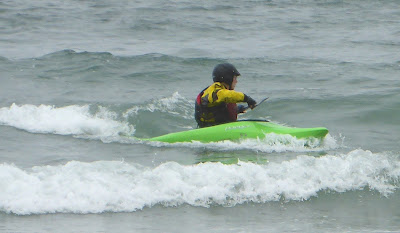 They also demonstrated an ease in communicating the crucial basics to us newbies, while offering a preview of the complexities involved in more advanced kayak surfing.

And once each of us had caught even one wave just right, and felt that physical and mental rush, we were eager to learn more. It’s not just about waves, it’s the shape and type of wave. Understanding rip currents that can work for you or against you. Interpreting the size and timing of swells. Knowing wind and weather variables, and a lot more.

But a good instructor also knows it's wise not to overload students with information right off the bat. So I asked Kelly to offer a few basic points that she tells everyone who takes her classes organized through California Canoe & Kayak. Her four points:

(1) Smile -- Smiling and laughing releases good endorphins helping to lower anxiety and stress.  The more relaxed you are in the surf, the easier it will be to respond to conditions.  Remember kayak surfing is supposed to be fun!

(2) Avoid crowded beaches until you learn appropriate surf etiquette and have the ability to control your kayak in the surf.  If you find yourself swimming next to your boat, grab it immediately and guide it to shore.  This is a skill you should practice in advance.

(3) Never hesitate to sit out a session if conditions are not appropriate for your skill level.  Enjoy a warm beverage and observe the surf.  There is much to be learned from watching the waves and board surfers from the beach.

(4) Keep a surf log. Include the forecast, conditions at the surf break, and your experience.  Only time and experience can help you learn the nuances of a particular surf spot.

One more thing. I’m usually an advocate for the “just get out there and try it” school, but not when it comes to kayak surfing. Schedule a class with a qualified instructor. Even if you’ve been kayaking for years, the surf is a world of its own, and you need a guide.

The "Bodega Bash" kayak surfing event held Sept. 17-18 at Dillion Beach was sponsored by California Canoe & Kayak attracted top kayak surfers from around Northern California, as well as newbies looking to enhance their skills. While that event is past, there's more good info and links at this Web site.