Merced River now open to kayakers, so make plans for next spring...

Rounding a bend in the Merced River, my kayak nosed gently toward shore as Yosemite Valley revealed all its granite grandeur. Upstream, Half Dome dominated the distant skyline. Straight ahead and across the river, Yosemite Falls shot from craggy heights. And downstream, El Capitan loomed menacingly under racing clouds. To call it breathtaking would be an understatement.

Not another soul in sight. Yet barely more than three miles away, Curry Village buzzed with activity. Only the sound of the river and birds twittering in the trees broke the silence here.

And then the weight of history hit me like a river rock – naturalist John Muir, his camping partner Theodore Roosevelt, and the incomparable photographer Ansel Adams had all stood at or near this spot. And here I was, the first kayaker on this stretch of the Merced River since Yosemite National Park opened it to paddlers just a few days earlier.


Okay, maybe not the very first kayaker. The first in a sea kayak. At least the first in a tie-dyed sea kayak with a rubber ducky figurehead. That, for sure. I could see Muir looking aghast at my ducky, and hear Roosevelt sneer, “Roughing it?” Then a question from Adams: “What’s ‘point and shoot?’” Nope, moi wasn’t a candidate to join these legendary members of the Yosemite pantheon.

No matter. Here's what's important: Most of the Merced River within Yosemite Valley is now accessible to the average recreational kayaker. It’s a paddling experience that should not be missed. And the slower the pace, the better, so as to bask under what Muir called the “Range of Light.” On a solo trip, I split six miles of river into two trips in two days, at an average speed of about 1 mph. And loved every minute of it.
With a group and shuttle vehicles, you could do a perfect one-day paddle, with plenty of time along the way for picnicking, short hikes, and scenery gawking. There are beaches large and small, some inaccessible except by water. River eddies aplenty, too, offering the perfect pause for photo ops.

On a weekday in early May, I launched just below Stoneman Bridge, near Curry Village, and paddled about three miles downstream to Sentinel Beach. (“About” because with all the stops, eddy play and upstream paddling, it was difficult to gauge distances accurately.)

This short stretch of river has been used for Yosemite rental rafters and others for more than two decades. But at the end of April, for the first time, the rest of the Valley river run opened to kayakers who bring their own boats. No permits required. (More details below in “Launch Lines.”)

On my first day, the river was virtually deserted, save for a young couple from the San Diego area and their two children in a small raft. NorCal Yak pals Lindsay and Jim were paddling at a disadvantage, as they had less than one-and-a-half paddles between them.

“Hit a rock?” I asked Jim of his broken blade. “No, it was a bear,” he replied, and I thought he was kidding until I heard the story.

They were staying at Housekeeping Camp, just downstream from Curry. The day before, a bear ambled in and grabbed a diaper bag it mistook for a picnic basket. With the camp in an uproar, Jim grabbed his paddle and beat the ground to scare off the bear. The paddle broke – no word on the fate of the diaper bag -- and a Yosemite story joined the family lore.

Lindsay and Jim had left their vehicle at Sentinel Beach, and were kind enough to give me a lift back to Curry. The next day, I returned to Sentinel and launched for the next three miles down to El Capitan Bridge. This was the quiet, more secluded stretch where I met Muir, Roosevelt and Adams, at least in my mind.
Also NorCal Yak pal Dave, whom I first spotted on a beautiful pinto ambling into some alders along the river.

At first I thought I was just hallucinating again, but Dave turned out to be a retiree-refugee from Orange County. He enjoys riding in this area until the summer crowds arrive, when he and the pinto hightail it for high country.

Dave was the only person I met that day who seemed to feel as lucky and content as me. I pitied the dozens of visitors back at Curry who hovered around the wi fi station with their tablets and smartphones, grumbling about download speeds and oblivious to the spectacles of nature all around them.
I could go on and on about the beautiful vistas of Yosemite Valley, the sun and clouds reflecting off peaks and clear water, but the fact is that every photo here is worth a thousand words, as the saying goes. What needs to be added is the perspective of viewing these postcard scenes from the river – and away from the crowds and traffic that often choke valley trails and roadways during peak season.

Launch your kayak into the Merced in Yosemite Valley when conditions are right, and it’s truly a magical experience. Now that summer crowds are descending on the valley, that might mean holding off until a quiet day next spring – but it will be well worth the wait.

About the right conditions. Dumb luck never hurts, which certainly applied in my case. First, a blogger pal tipped me to the new kayaking policy only a couple of days after it went into effect. I immediately booked a tent cabin at Curry Village for the following week.

Second bit of luck: Water levels were forgiving during my impromptu visit May 11-14. During my stay, the river was running at a depth of 3 1/2 to 4 1/2 feet along a six-mile stretch between Curry Village and El Capitan. That proved to be ideal for a slow, relaxed paddling pace.
The first leg of the trip began at Stoneman Bridge and ended at Sentinel Beach. The run was shallow in spots but still navigable and safe for most any kayak from eight to 16 feet in length, sit-on-top or sit-inside, and easy enough for novice paddlers and casual rafters. (Note that PFDs are required at all times on all stretches of the river controlled by the National Park Service.)

Stoneman Bridge, near Curry Village, provides easy kayak access. Park your vehicle at the Curry Village Recreation Center and it’s only a two-minute walk across the road and down a dirt bank to the water below the bridge. Three miles down, Sentinel Beach is a large, sandy area that serves as the concessionaire raft takeout point. There are pit toilets and sufficient parking spaces in the dirt lot about 80 yards from the water.

On the second day, I drove to Sentinel and paddled down to El Capitan Bridge, figuring that I would hitchhike or walk back to Sentinel without my boat, then return for it. This stretch of river provided easy paddling, though eddy lines swirling near a few rocks and snags near the bank merited caution. Shallows under the Swinging Bridge exposed a couple of large rocks that could cause problems for an unwary kayaker.

El Capitan Bridge offered several takeout spots on the riverbank above and below the span. There’s plenty of parking on the road shoulders here. I locked my boat to a tree and began the trudge back to Sentinel Beach to retrieve my car. And wished I had brought a pair of dry socks as I squish-squish-squished up the road, my thumb thrust skyward.


Then a Park Ranger cruiser passed. And stopped. Thank you, Ranger P. Johnson. It was a bit awkward having a conversation from behind Plexiglas and steel mesh, but he and his partner were quite nice. And they let me out right at my car. Did I mention feeling lucky? It's crucial to know the approximate river level before you go into the Merced.  Inside the park, there are depth gauges conveniently placed on the bridge abutments. Outside the park, your best source of advance info is the Dreamflows Web site. (Go to "California Sierra -- West Slope, Southern" and check both the daily flows as well as monthly averages for the Merced at Pohono Bridge.

When I was kayaking through the valley, that 3 1/2-to-4 1/2 river depth corresponded to 400-600 cubic feet per second (cfs) flow reported on Dreamflows. It would have been fine if the flow had been a bit higher, but much lower flow would have indicated some really shallow spots along the way. In either case, it would be wise to paddle a plastic kayak, rather than an expensive fiberglass boat that doesn't bounce off rocks so well.

The trick is to find a time when river conditions are most favorable, especially during periods when tourist traffic is lowest. Think springtime, but also be mindful of snowmelt or heavy rainstorms in the high country. Park guidelines indicate that the river is shut to traffic when it rises above 6 ½ feet, apparently due to the low headroom on some bridges. That could become hazardous when flow ramps up quickly after Sierra storms.


Just how the Park Service will enforce river policy and precautions seems a bit unclear. Yosemite Park Chief of Staff Mike Gauthier told NorCal Yak it was quite a bureaucratic struggle to open Yosemite to kayakers without requiring special permits. At the same time, the plan calls for no more than about 45 kayaks daily on the park portion of the Merced River.

Gauthier said the new policy went into effect without fanfare this spring so that its impact would be gradual and could be fine-tuned. But he emphasized that he wants to see paddlers enjoy Yosemite as much as the hikers and climbers who visit here. Kudos for that.

The key to success of this new kayaking opportunity depends largely on responsible paddlers who put safety first. Some sections of the Merced are well beyond the capabilities of average long-boaters, and even some whitewater enthusiasts, reports Canoe & Kayak magazine.
When I reached El Capitan Bridge on the second day, there was a long, straight and quiet stretch of water extending a couple hundred yards below the span. It was an easy paddle on down to the next bend, and I knew I was close to Bridal Veil Falls, but I couldn’t quite see what waited around the corner. So I headed back.


The next day, as I left the park via Highway 140, I surveyed the two miles of river from El Capitan to Pohono Bridge for the first time. By then the flow had dropped to 300 cfs. There were some beautiful meadows and placid stretches of river, with Bridal Veil Falls and the upper valley in the distance.
But also rocky shallows and a jumble of boulders, stumps and deadly-looking snags in places. And then Pohono -- where the river bottom dropped into a boiling boulder stew just before the bridge. Yikes. That expression about looking before you leap, or paddle, come to mind. 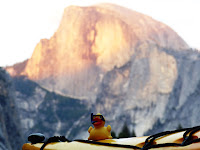 Will I come back and paddle the Merced River through Yosemite Valley again? You bet, as long as I can still hold a paddle in my hand. If you haven't guessed by now, this is one of NorCal Yak's "A List" destinations, and easily in the top five on that list. Take it from me and my rubber ducky -- this could be the shortest, slowest, and most spectacular paddle you may ever find.

(See a video from this trip posted on YouTube. And more Yosemite photos in this album.)
© Glenn Brank, 2015
Posted by Glenn Brank at 8:55 PM