Kayaking along the coast with a bird's-eye view

It’s that time of year when Northern Californian kayakers get a bird’s-eye view of, well, birds. In addition to migratory waterfowl traveling in the fast lane of the Pacific Flyway, other wonders are on wing, if you happen to paddle in the right place at the right time.


Two NorCal Yak pals were exploring the mouth of the Russian River recently when they spotted a pair of bald eagles only a short distance from the visitor’s center in the town of Jenner. A great photo op, and boy, does the picture tell a story.

First off, those eagles graciously shared their stump with a culinary colleague – a vulture. Yes, our national symbol is a scavenger at heart. Not exactly awe-inspiring. Now look closely at the eagle on the right. There’s a strand of fish entrails stuck on its claw. That would be the raptor equivalent of walking out of a restroom with TP on your heel.  How uncool.

In the same paddling spot a week or so later, I searched for the eagles in vain, though docents at the visitors center in Jenner assured me that the pair were still around. It’s fairly unusual to see eagles on this stretch of the coast, they said. Eagles that spend their winter vacations in California often hang out at larger inland lakes and reservoirs, according to the state Department of Fish and Wildlife.
﻿

Even when eagle-less, Jenner offers easy, scenic kayaking. (See “launch lines” below.) Paddle up the Russian past grazing cows and rustic farmhouses set against lush hillsides. Turn the other direction, to the river’s mouth, and find waves crashing high over the craggy entrance to the Pacific. Just be cautious, as wind, tide and river current may create some challenging and changing conditions for paddlers. The day that I launched was lake-calm at mid-morning, but whitecaps began churning shortly after noon.

Bird-watching resumed a couple of weeks later in Tomales Bay, during a king tide. And this time, quite unexpectedly, an eagle appeared in the shallows near Inverness. It spent more than 20 minutes perched on a snag, then swooped out over the bay to chase an osprey away in a brief but dramatic aerial duel. Quite a sight.
﻿
Tomales also is home to an array of waterfowl, including blue heron, egrets, and pelicans, the latter my favorite feathered oddball. There’s nothing like being out on the water when a pelican targets a fish and crash-dives nearby. Like eagles, pelicans were once endangered by DDT until the pesticide was banned in the 1970s. Now both birds have made a comeback.

LAUNCH LINES
If you’ve never taken the 20-minute drive up Highway 1 from Bodega Bay to Jenner, treat yourself to an awesome series of ocean vistas that are part of Sonoma Coast State Park.
Jenner-by-the-Sea may be the official name, but it's a stuffy moniker almost as big as the town itself. The visitor center is a former boathouse and source of community pride. There's paved parking, a free boat launch, and friendly, helpful park docents behind the counter. Hours are 10-4 on Saturdays and 11-3 weekdays, as staffing allows. (And a shout-out to park volunteers Joan Bacci and Katie Killefer, who were most helpful the day I visited. Without people like them, our state parks would be in a world of hurt.)

Step across the parking lot to Café Aquatica to reload calories after paddling up the Russian. The kitchen is tiny, the menu ambitious, the food outstanding. Plus there’s plenty of seating for diners on the outdoor deck, where they enjoy a view of the bay – oh, look at that crazy kayaker bouncing on the whitecaps out there.
~ ~ ~


Tomales Bay has become one of my fave coastal paddle spots because different areas of the bay offer distinctive views and moods. This latest paddle was an eight-mile roundtrip from the launch at Tomales Bay Resort, next door to Blue Waters Kayaking, just north of Inverness. The resort has a paved launch ramp and day parking for $5, while the outfitter rents boats and offers guided tours. 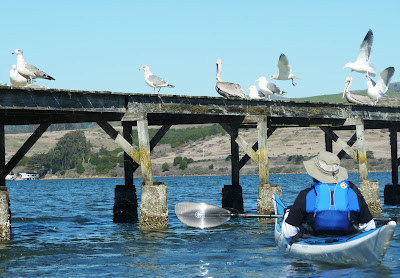 Our unguided paddle took us into shallows at the south end of the bay, approaching the town of Point Reyes Station (and courtesy of a six-foot-plus tide). Along the way, we passed the Inverness Yacht Club, not so high-falutin as its name implies, and some whimsical cottages on Sir Francis Drake Boulevard. The view is better from the water than from the road.
And for that après-paddle meal? Try Osteria Stellina in Point Reyes Station. It’s a relatively small place with happy noise and locally-sourced food, including a quirky but delicious oyster pizza. Just across the stree, browse around Toby's Feed Barn, a Point Reyes Station landmark, and check out art exhibits in the back room.