MONO LAKE – If there’s any kayaking destination that might be mistaken for another planet, this must be the place. At dawn on an August day, temperatures dipped into the 30s. Snow still traced bare mountain peaks. And below, the desert held a small sea captive, as it had for eons.

When the first rays of sun slashed over the horizon, the surreal scene was complete. Steel gray waters shifted to violet, then quickly took on hues of blue as darkness receded overhead. Strange, gnarly rock formations from another world began to shine in the emerging light. Birds stirred and screeched in the distance, breaking a vast stillness.


It seemed otherworldly, but the cold air that pricked lungs and fingertips quickly brought us down to earth. We had driven a couple of miles of dirt road to Navy Beach, on Mono’s south shore. This is the closest good launching point to the natural towers known as tufa. Their name and nature are as strange as Mono World itself, a confounding blend of ecology, geology, politics and science. Way too much for a single blog post.

One of the more concise, understandable descriptions of this place comes from Russ “Nomad Russ” Taylor, a Mono lake guide, professional photographer and world adventurer. I met him briefly while paddling on the lake. In addition to offering some truly spectacular photos, his “Nomad Russ” Web site explains:

“Tufa is a type of limestone that is formed when calcium-rich spring water mixes with the carbonate-rich Mono Lake water and precipitates around the spring. The towers grow underneath the waters’ surface. These tufa were exposed when the city of Los Angeles diverted four of the five streams flowing into Mono Lake.” (Stream diversions began in the 1940s, part of an old political axiom that water always flows toward money.)

“Deprived of its freshwater sources, the lake volume dropped by half, exposing nesting colonies of gulls to predation and again doubling the lake’s salinity,” Nomad Russ continues. “The entire eco-system began to collapse. In response David Gaines formed the Mono Lake Committee to reverse this trend and save the lake. In 1994 the California Supreme Court mandated that the lake should rise to a level of 6,392 feet, which will partially restore the ecosystem and migratory bird habitat….” 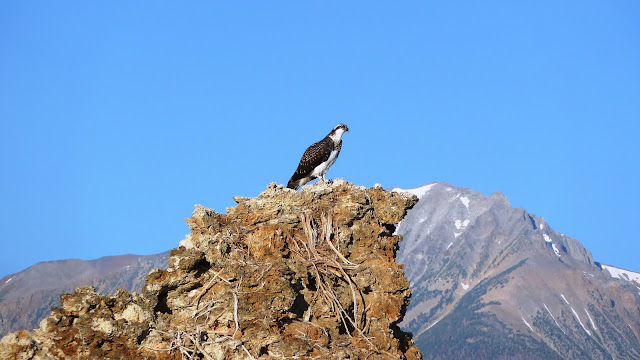 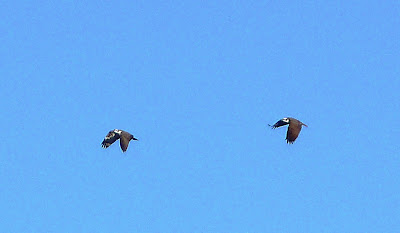 And since then, in fits and starts, things have gotten better. Mono is a major California tourist attraction, especially considering its remote location. More than 250,000 people annually visit this lake with three times the salinity of the Pacific Ocean. There is an excellent visitors center on the west shore, and many well-marked walking trails.But the best way to tour Mono World is from the water.
The most surprising feature for a first-time paddler here, aside from the weirdly wonderful tufa? Water clarity. In places, visibility may extend 20 feet down or more, revealing tufa “reefs” beneath the surface. No fish swim among these “reefs” – the water is far too salty for that. But again, Mono World surprises. It is home to more than 300 species of birds, many of them migratory waterfowl.

Despite the absence of fish, magnificent fish hawks – osprey – nest here, then cruise nearby lakes and streams to bring trout in talon to their tufa top nests. Generations of ospreys have woven sticks and branches in the towers, creating the appearance of tufts of "hair" in the naturally sculpted formations.

Most of California’s sea gulls also fly here to lay their eggs. And in October upwards of 2 million grebes arrive for a “shrimp fry.” While Mono World may be one over-salted mini-sea, it’s far from dead, biologically speaking. In the summer, trillions of tiny brine shrimp, found nowhere else on Earth, create a milky stew as kayakers paddle through them. Shrimp season peaks in October when upwards of 2 million grebes converge on Mono Lake to fatten up on the critters.

And for every shrimp, there may also be an alkali fly. Strange buggers they are, living underwater until they mature and pop to the surface. Then hungry gulls literally run along the shoreline and scoop them up by the beak full.

Mono World includes Negrit and Paoha, two "young" volcanic islands. Most of the gulls favor Negrit for their rookery. The island also served as a backdrop for “Fair Winds to Java”, a 1953 Hollywood production. The movie needed a volcano, so they built a one-sided wooden prop about three stories high. It’s still there.

These days, the strangest story in Mono World has a script that even Hollywood couldn’t dream up. The state has announced plans to drop 70 state parks and reserves by next year, Mono Lake among them. Just at the point where the lake was nearing a water level deemed sustainable. And widely acknowledged as critical wildlife habitat, with unique environmental assets. With its status now in question, perhaps Mono Lake would have been better off on another planet.

In terms of assuring its future, this place holds one advantage – the Mono Lake Committee, a long-time, well-organized group that raises funds, recruits volunteers, and advocates for the restoration and preservation of the lake. The group’s Web site may be the single best source of information for prospective visitors. As well as information on the campaign to preserve Mono Lake in the face of state park cutbacks.

Other organizations fighting to save state parks include the California State Parks Foundation and Folk4Parks.

Some additional online resources for Mono Lake include the California State Parks and the Mono Basin Scenic Area Visitor Center. The center is a must-see, especially for first-time visitors, but the best online links for it may be found under the Mono Lake Committee site. Note that the visitor center typically closes between November and April, due to weather conditions. Call ahead for information on its status.

There are no restrictions on private boating on Mono Lake. However, the islands are off limits to human traffic from April 1 to August 1, when gulls are nesting. There is also a 250-yard off-limits zone around active osprey nests. (Photos for this post were taken with a telephoto lens.)
Early mornings at Mono Lake provide both the best light for sightseeing and the calmest conditions for kayaking. It's best to be off the lake by noon as winds may pick up.
© Glenn Brank 2011
Posted by Glenn Brank at 2:08 PM