(This is the second of two posts on "Camp Arbuckle.")

REDDING – Kayaking and writing are similar in that, most of the time, paddling and story lines follow a planned route from one specific point to another. But now and then you can just meander along without any particular destination in mind, and it still works out. On that note, more about a recent kayak and camping trip to Shasta County at the invitation of the Arbuckle family and their new Headwaters Adventure Company.

There are times when you go paddling with just a few people and things can still get complicated. So given the prospect of a
three-day, three-lake weekend with 40-plus other paddlers, it felt a bit unsettling at the outset. How would this trip turn out? The answer – it was simply wonderful. Friday morning at Whiskeytown Lake turned into a parade of watercraft, ranging
from basic sit-on-tops to high-end, commercially-made sea kayaks to some incredibly sophisticated, hand-crafted boats. Just seeing so many kayaks in one place made for quite a spectacle, both on the water and on the two-lane roads of scenic Shasta County.

And the paddlers were just as varied and interesting as their boats. There was the guy who was said to bear a strong resemblance to a famous paddler photographer. Someone else sculpted very sleek boats when he wasn’t building mysterious stuff for a defense agency.

Then there was the camp. Some people showed up with tents they’d just purchased, others rolled up in Airstream trailers with portable wet bars. And everything in between, including a hammock – good for rolling practice. A free-wheeling Saturday night potluck with smokin’ ribs and more. And it all seemed to flow perfectly. My friends and I agreed that there’s something about kayaking that usually brings out the best people. As well as the best in people.
~ ~ ~
The difference between camping and death is that, with camping, you can take it with you. And people usually do.

For example, our paddle pod held a pre-trip meeting and carefully determined who would bring what. The six of us still managed to arrive with 12 camp chairs.

Worse, we stashed them so deeply under piles of tents, stoves, coolers, and assorted accessories that when we arrived at Headwater Adventure Company’s new storefront in Redding, we could only dig out a couple of chairs – so we sat on the concrete floor to enjoy the store’s grand opening barbecue.

Then, as we were leaving to set up camp before dark, a surprise offer: Would we prefer to spend the weekend indoors – with a toilet, shower, kitchen, and real beds? Secure in our belief that we were hardy outdoorspeople, we broke the speed limit getting there. So hundreds of dollars of fancy camping gear never touched dirt. But a price still had to be paid in blood. More on that later.

~ ~ ~
The term “super mom” seems kind of clichéd, but we found the real deal in Terri Arbuckle, mom of Dan, spouse of Joe, and official den mother of “Camp Arbuckle,” as the three-day weekend paddle was called. Terri’s also a grandmother, yet she could pass for someone in their 30s, no kidding. On our first day of paddling at Whiskeytown Lake, she jumped into frigid water and held back a 75-foot buoy line, unassisted, so that dozens of kayakers could pass through a channel more easily. At first, I didn’t even notice that her makeup was always perfect and her paddling garb nicely color-coordinated all weekend long. But some women paddlers sure were envious. The only thing Terri didn’t do was run the grill for two nights. Husband Joe did that, turning out some of the best ribs and chicken I’ve ever tasted. Geez, you have to wonder about people like that – like, is it too late to ask them to adopt you?


~ ~ ~
Saturday: Up Highway 89 we went to Lake Britton best known for its proximity to McArthur-Burney Falls, a state park with a spectacular spigot. On this paddle the Arbuckles shared their “other falls” with us on a semi-challenging and interesting hike. We docked in some tall grass, walked up a dry streambed, repelled down a mini-slope, then made our way uphill to a spot so pretty that the photo-to-kayaker ratio went way over the top.

Afterwards, our lunch stop turned into an impromptu practice session on rolling, bracing, and wet-exit-reentry techniques, highlighted by a rolling lesson that featured Terri in a kayak and Dan in the role of instructor. An inspiring scene for the rest of us paddlers.
~ ~ ~
Every story has a “hook” – an angle that pulls the reader in. This one had a real hook. A No. 8 Eagle Claw barbed hook, to be precise. It seemed that the place where we stayed was also used by an angler. He apparently lost a hook. My big toe found it late the first night. Chaos ensued, but fortunately, an anesthetic treatment of ice (to toe) and beer (to mouth) made the extraction bearable. Tetanus shots -- don't leave home without them.


~ ~ ~
Sunday, our final day. Bouncing down a three-mile dirt road to Ahjumawi Lava Beds State Park. A couple dozen vehicles loaded with kayaks kicked up clouds of dust as the locals – a herd of cows – watched in amazement. Or perhaps amusement, with cows it’s hard to tell.

The park is accessible only by water, the trip totally worth it. The first thing we saw when the dust cleared at end of the road was Mt. Shasta, a jaw-dropper even at 50 miles away. 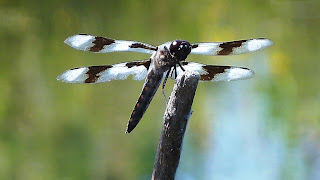 We had heard Ahjumawi was bad for skeeters, and so came armed with enough chemical weapons to set off a terrorism alert. But mid-morning sun had driven blood-suckers into hiding. Plus, there were about a zillion dragonflies, voracious skeeter eaters. They also just look so cool. Orange ones, red ones, striped ones, and my favorite, some miniature helicopters in iridescent blue. Dozens of them swarmed around my bright blue yak like little UFOs around the mother ship.

Strangely alluring, this place that on first glance seemed so stark and uninviting. Many reference sources use the word “primeval” to describe Ahjumawi, whose name roughly translates to “where waters come together.” It’s pure wildness grounded in lava rock and overlaid in marsh and cattail. But there was also something in the sky and water here that could not be described. Sometimes, the trip ends at a place where words are no longer needed.