Delta paddling can take you South

It involved only a few miles of paddling from the Cosumnes River Preserve to a marina near the town of Walnut Grove, but the look and feel of this laid-back stretch of Sacramento Delta brought back a stream of memories from youthful days in the Carolinas -- floatin’, fishin’, and fun times.

The Lodi Paddle Club trip was organized by Dan Arbuckle of The Headwaters, a well-regarded kayak shop. Dan probably knows this area as well as I know my suburban backyard. He volunteered to coordinate an introductory, one-way paddle with a free ride back to the preserve, an offer too good to pass up. The Cosumnes is the last free-flowing river in the Central Valley, and the preserve widely known for its habitat and wildlife. 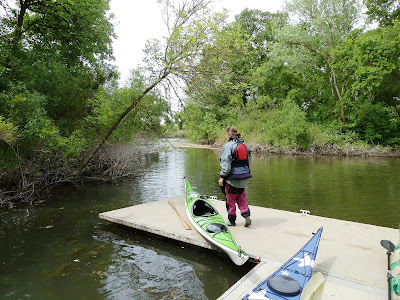 “With its 1,100 miles of waterways, the Delta is like the San Juan Islands of California,” said Dan, who led a multi-day camp-and-paddle trip last season and plans another this year.

True enough, but our Delta also bears a strong resemblance to Southern rivers like the Savannah, Catawba, and French Broad. (Honest, look it up.) It’s not just about flow, vegetation, and geography. It’s about attitude – easy, relaxed, enjoyable. It’s about old car seats placed strategically along the riverbank just above favorite fishin’ holes, a rope swing tied to a humongous tree limb hanging over the water, and places like Wimpy’s Marina, where you can buy burgers and bait. Delta kayak fishing paddling

Which was our initial destination on a recent, breezy Saturday. We launched from the small dock at the pristine Cosumnes preserve, then turned down a section of the Mokelumne River flanked by levees thick with trees and brush. We heard but could  not see farm equipment working somewhere close by, and at one point, a pickup truck barreled past on a dirt road just over the riverbank. 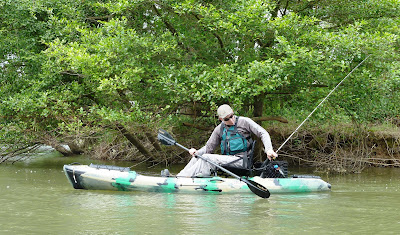 It also allowed Dan, our generous host, to engage in a little bass fishing from his sit-on-top yak, which brought the Bible Belt to mind. First, Dan’s boat was painted in camouflage – also known to some fashionistas as “camo, the plaid of the South.”

Then there was the raised platform seat, more of a reclining lawn chair, really, which provided the perfect relaxed stance for trolling. It also should be pointed out that many people mistakenly think fishing is a sport, while everyone in the South knows that it actually is a religion. (Being a gracious guest, I didn’t tell Dan that he probably went home empty-handed because he had not prayed hard enough.) 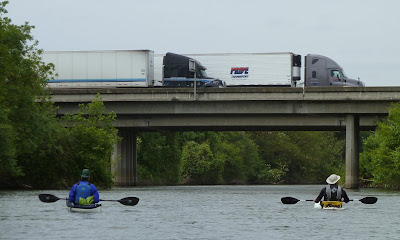 Fish or no fish, it was a delightful outing with pleasant company. Even the guy with degrees from those two big Yankee colleges told good jokes. We passed under I-5 as big rigs rumbled overhead and swallows darted and dove above the bridge abutments. There were also a pair of red tail hawks and a few great blue herons along the way. Most other birds stayed down and out of sight due to the wind, but the sheltering levees kept us paddlers unruffled.

By the time we reached Wimpy’s Marina, where Dan had parked his yak trailer, everyone was ready to stretch their legs. We watched a power boater roar his outboard right out of the water and up onto his trailer at the launch ramp – some pretty good horsepower there – and then took our turn, if a bit more slowly. 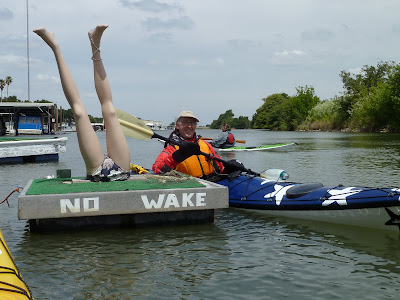 Returning to the Mokelumne, we voted to circle Dead Horse Island, which is prettier than it sounds and also home to the rather impressive Walnut Grove Marina. Several of the houseboats there were larger than my landlocked abode, plus they had waterslides and dish TV. And one of them had an eye-catching “no wake” display – the lower half of a manikin on a small float, complete with bikini bottom and a string of beads on one ankle.

Again, something you’d probably see in the South – though she should have been wearing camo.

Just minutes off I-5 between Sacramento and Stockton, the Cosumnes Preserve is easy to find. Kayakers must launch from the floating dock about 200 yards from the preserve visitor center. Most paddlers start and end their trip here, and the preserve offers detailed directions for day trips.

Thanks to Dan Arbuckle, we were able to see a bit more water. My GPS clocked about 5.5 miles from the preserve dock to Wimpy’s Marina. Circumnavigating Dead Horse Island adds about three more miles to the trip, but be aware of wind, current, and tide factors.

A couple of guys in our party took off ahead of us to circle the island on a route that returns to Wimpy’s. But we didn’t see them again for a couple of hours since they apparently took a wrong turn. So if you try this one, you might want to take a GPS, a good map, and if you’re still not sure, stick with someone like Dan who knows the way.
© 2011 Glenn Brank
Posted by Glenn Brank at 10:23 AM