Learning the in's and out's of surf paddling

MONTEREY – With my paddle spinning like a windmill in a gale, I rocketed toward the beach, skimming atop a wave in thrilling style. “This isn’t so hard!” I thought, just before Ol’ Blue, my sea kayak, suddenly buried its nose in the sand and we jerked to a halt. Then a wave spun me sideways, flipped me upside down, and I chugged some Pacific brine while Ol’ Blue pounded my noggin into the sand. Yep, really nailed that landing. California sea kayak lessons

Welcome to a “surf zone” class in Monterey, wherein you learn the process of launching and landing sea kayaks in the surf – or “impact zone” as the kayak school brochure called it. And everyone learned all about impact. (None of us suffered serious injuries, just bumps and bruises and the usual sting of public humiliation.)

One lesson we learned: Never get ahead of a wave, otherwise your bow burrows into the sand and the wave flips your yak over or rolls you. By comparison, launching was fairly easy, at least on this particular day. The most important point seemed to be that once you commit to launch, go for it flat out, even if a wave rolls over the boat and drenches you. Never thought I'd feel so happy to wear a skirt.
Earlier, it all looked so easy when our instructors Brian Chance and Buck Johnson took turns demonstrating the basic techniques of landing on the beach. To the casual observer, they just floated out there, saw a wave coming, and then paddled in with a nice little touch of parallel parking at the end. Monterey sea kayaking classes paddling

But as we quickly learned, the easier it looks, the more difficult it can be to do. A few basic tips from our class:
• Before you launch, sit in your kayak and look out at the waves breaking on the beach in front of you. If they’re taller than you are, it might be a good day to go paddling somewhere else – or do something besides kayaking. Our class originally was planned for Moss Landing, but surf there was up to six feet. Once we got smacked by smaller waves in Monterey, we appreciated the instructors' decision to move the class. California sea kayak Monterey paddling

• If you’re launching into the ocean, don’t go alone. And when in a pod, keep your buddies a kayak length to a length-and-a-half away to give everyone maneuvering room. Plus, having someone on the beach to “spot” you and offer hand signals for landings can really help.

• Keep paddling – and be aggressive once you’ve chosen to ride a wave into shore. If you don’t do anything, the ocean will do something to you.

• Never turn your back on the ocean. Sounds a bit crazy when you’re surrounded by water, but constantly look over your shoulder and stay aware of your surroundings – especially the swells that are coming up behind you. 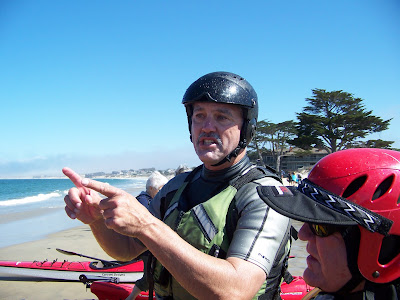 • Know the right way to brace, or stabilize, with your paddle. Buck, shown above, led us in a “pledge” to keep our elbows against our ribs when we needed a high brace, rather than raising our arms over our heads and risking a dislocated shoulder. Buck is also a paramedic, so we listened closely.

Back home now, the minor scrapes and scratches are healing nicely. The experience of a good training class makes me want to go back for more. And I still can hear the ocean – clogged by sand in my right ear.

You can Google for books and videos on kayak launching and landing in surf, but there's no substitute for training in the water. Our class was run by Current Adventures, an outfit started by veteran surf kayaker Dan Crandall. Other good outfitters that offer sea 'n surf classes include Monterey Bay Kayaks. (See my previous post on this beachfront outfitter.)
Posted by Glenn Brank at 11:02 AM