(At the end of Part 1, our intrepid kayaking tribe had just launched into the Colorado River below Hoover Dam…)

Our kayak escort had tipped us to a spot where some hot springs bubbled into a cave – a natural sauna – just downstream from the launch point. But river current and water level conspired against us. Blocked by a rocky spit, the river swept us by before we could make shore. It was a bit of a letdown, though the thought of being in the dark with brain-killing amoeba eased my disappointment. 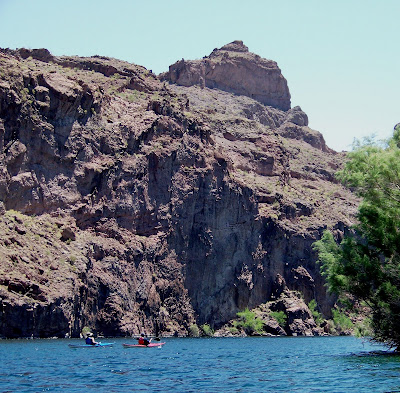 Moments later, we came upon a small inlet with a thermal spring that spewed straight from a wall and gushed
into the river. More accurately known as “seeps,” such springs emerge from cracks in the cliffs. The source of the heat itself remains a mystery, according to the National Park Service. 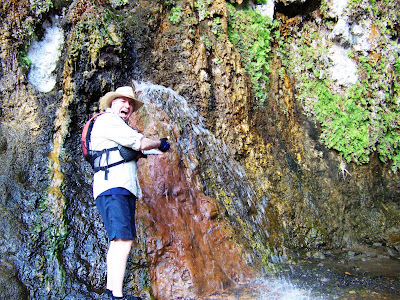 Temperatures from seeps and springs may range above 130 F, compared to river water that’s closer to 50 degrees year round. Out of the kayaks, our toes felt the sharp contrast – numbing cold one second, scalding hot the next. Though this was just a small spring, it was brightly painted in hues of orange, gold, and green, an odd little ecosystem of mineral travertine and mossy vegetation.

Later in the day, we scrambled narrow canyon paths, sometimes up to our ankles in warm water flowing from thermal springs above. One stop was a place known as Boy Scout Canyon, where a well-secured rope helped us climb over a small waterfall. Other small waterfalls had no such luxury. Thankfully, we wore sturdy shoes. 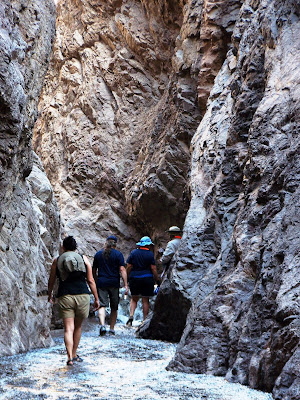 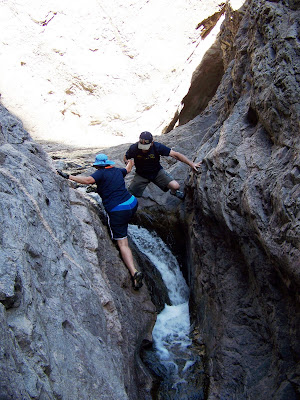 Another stop, at Arizona Hot Springs, offered a large beach area complete with porta-potties, boaters, other kayakers, and a school group that had been camping out for a couple of days. The concept of youths without cell phones seemed strange, but apparently, the kids were coping. Part of their alternate entertainment involved hiding among the rocks and trying to fool us with odd bird calls.

The hike up to Arizona Hot Springs took us up a 20-foot metal ladder to…a drained pool. It seems that the natural springs get a little help from the National Parks Service, which strategically places sandbags to allow a more spa-like experience. We had joked about the spa cleaning schedule, and darned if it wasn’t true in this case.

A bit further up the canyon, we came to another pool – sandbags intact – that let us sit and soak up to mid-chest. Even if the pool had been deeper, no one would have wanted to dive in head-first. Warning signs on the trail cautioned against getting thermal water into our noses. The kayak escort wasn’t kidding. A rare but potentially deadly brain-infecting amoeba is known to inhabit these springs. We kept our noses high and dry.

Back on the river again, we found a shallow cove for a lunch stop. Even on this breezy spring day, we flattened ourselves against huge boulders to gain just a sliver of shade. Summer in Black Canyon must be a favorite vacation destination for the Devil himself. 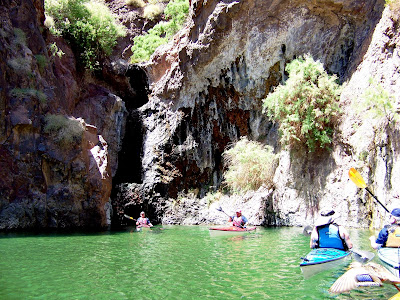 Later on, the river offered a leisurely, nearly paddle-free float and more cliff gazing. We spotted several bighorn sheep – including at least one ewe and her lamb – more than 200 yards up an impossibly steep slope. They blended into the rocks so well that, at times, they seemed to vanish before our eyes. 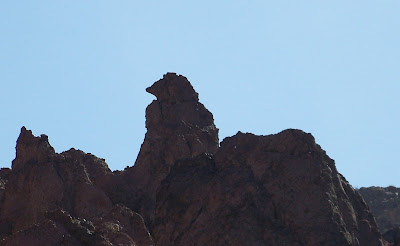 Cliff scapes were as fascinating as the wildlife, a spectacular blend of desert outcroppings, colors and shadows. We took turns interpreting them – a giant bird here, the spine of a huge dinosaur there. There also was some vegetation in Black Canyon, nature’s quiet testament to the will to live. Barrel cactus popped out of perpendicular cliff walls. Small trees somehow planted themselves atop boulders, wrapping root around rock, octopus-style.

Even nine miles or so downstream, the hands that built Hoover Dam still left a few fingerprints. A cable stretched across the gorge still holds a small cable car, but its main function seems to be as a perch for cormorants.

Finally, as we approached the Willow Creek takeout in mid-afternoon, a group of canyon guards attracted our attention. On a hill overlooking the harbor, a half-dozen bighorn males. They looked at us with total disdain and flaunted their outsized, curling hood ornaments. The message was clear. Hoover Dam may have officially tamed the Colorado River, but there is still plenty of wildness in Black Canyon. 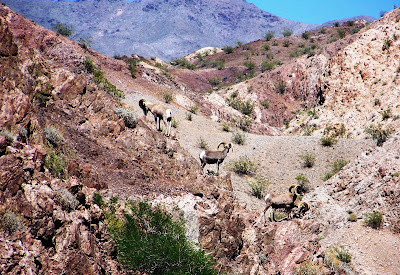 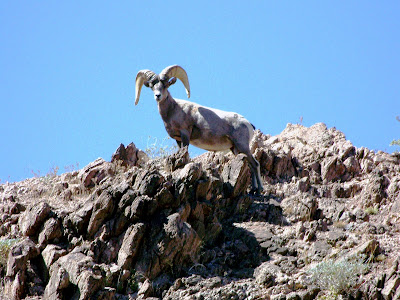 For more info about Black Canyon, start with the National Park Service. Learn more about the hot springs.
Check this detailed map.

Needless to say, kayaking Black Canyon  is a great experience for any paddler. We were fortunate to have a couple in our group who had paddled the canyon before. We were even more fortunate to have them haul our kayaks for the 1,200 miles-plus round trip. Most folks will find using an outfitter to be a more realistic option.

With a guided or self-guided tour, Northern Californians can do Black Canyon on a weekend by flying into Las Vegas. But to fully enjoy the experience on and off the river, shoot for a three-day trip, at least. That allows time for a tour of Hoover Dam and a bit of local sightseeing. And if you think Hoover Dam sounds dull, think again. It’s an amazing monument to human engineering and determination. There’s a new book on the dam just out, and the author recently was interviewed on National Public Radio's Fresh Air. (Photo below taken from top of dam, shows access road to kayak launch point below a highway bypass span under construction.) 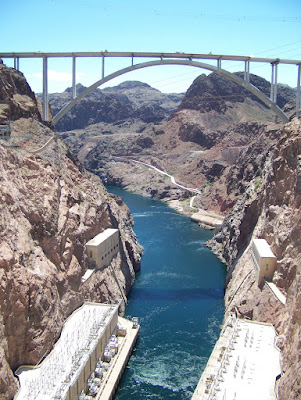 But first things first: Black Canyon kayaking is available through several area outfitters who can arrange for  National Park Service permits ($15 per person). Only 45 permits are issued daily. They provide access to the launch point below the dam. Some outfitters offer transportation from Las Vegas as part of their package deals.

For convenience, we got our permits from a Boulder City outfit, Desert Adventures. In addition to permits, they offer guided day tours in the $200 range, and also rent kayaks to self-guided paddlers for $60 a day. For popular weekends, you’ll probably need to make reservations at least six weeks beforehand. Weekdays are a bit easier, but plan ahead as far as possible.

One caution about trip timing – it’s the desert, remember? Even in early May, we hit some 90 degree days and it felt even hotter. Summertime temps frequently break 100. (See reference above to “himself, Devil.”) So if you choose to go in mid-summer, well, you’ve been warned. And will be warmed.

Next, where to stay. Boulder City was more to our taste than Las Vegas. Sure, a lot of the local landscape looks like the surface of the moon, but that seems normal compared to Vegas. There are plenty of motels. We chose the Hacienda Hotel & Casino, and it was a blast.

In early May, rooms ran about $25 a night on weekdays. The hotel restaurant also was a bargain – less than $7 for one of the best cheeseburgers I’ve ever sunk teeth into. While the Hacienda is nothing too fancy, the rooms were clean, beds comfortable, and staff friendly and helpful. It struck me as a throwback to a bygone era of Nevada casinos. On a Saturday night, I’m pretty sure I saw a table dealer take the mike on the tiny casino stage and do a passable cover of Neil Diamond. Really.

Boulder City – created to house the workers who built the dam – is a charming place too, once you get into the central business district with its shops and restaurants. One local favorite is Tony’s Pizza, and for good reason – excellent crust, good toppings and reasonable prices. Plus karaoke on a Friday night.

Just next door is Milo’s Cellars, a decidedly upscale wine bar. But the sidewalk tables of Milo’s and Tony’s virtually overlap. So if you hanker for a really good glass of red with that pepperoni pizza, voila! Finally, for Mexican food, there’s Casa Flores just down the street for authentic fare and margaritas. The latter strictly to maintain electrolyte balance in hot weather, of course.

(NorCal Yak did not receive any special consideration from businesses mentioned in this post.)