With some of the best snowmelt rushing down from the Sierra in years, it’s time to grab that paddle. But what about the kayaking conditions on a particular lake or river? One you’ve never kayaked before? Say it’s a couple hours’ drive away. How to know if there’s enough water yet? Or perhaps a bit too much for your skills?

Northern California kayakers can find the answers at Dreamflows. It’s an online resource aimed primarily at the whitewater crowd, but it can also be useful for us “smooth water” paddlers. Dreamflows is packed with an amazing amount of useful information. It’s well worth checking out this site if you're a paddler or anyone  who just enjoys being near the water.


Dreamflows is the virtual waterworld of Chris Shackleton, a Sacramento area software engineer who developed the site more than a decade ago with the motto, “I can’t boat every day, but I can always dream.” (And lest you think computer folk are a dull, physically inactive bunch, check out the photo of Chris shooting Canyon Creek below French Lake on the Dreamflows homepage. Hoo-ha!)

Chris explains that he got the idea from a paid subscription service that offered waterline updates. When that service cut back to Friday updates only, Chris said, “It was too late to make plans to go boating on the weekend unless it was going to be something local, so I created a very basic manual system to download favorite site data whenever I typed ‘go.’ I swiftly discovered there's a ton of flow information out there if you look.” best California kayaking river lake

Chris began automating downloads from various government water agency databases, and Dreamflows was up and running late in 1998. The site has drawn more than one million hits since then. As a real-time data stream, it’s the virtual equivalent of Yosemite Falls in the month of May. Dreamflows has flow data from about 200 places in California, and about 450 sites across the West. 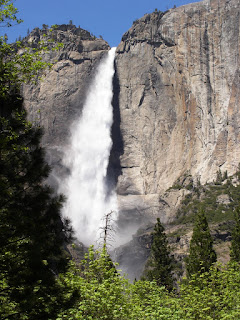 In fact, there’s so much data that it can be overwhelming, especially if you’re new to the site. From the Dreamflows homepage, start by linking to “General Information.” There’s also a “Help” link at the top of that page, and FAQ link on the bottom banner. But wait, there’s more, as the TV infomercial says. You can also sign up for Dreamflows alerts and automatic e-mail delivery of data for your favorite river.

In some cases, Dreamflows data is derived from estimates, and it’s clearly designated that way. Chris recommends that kayakers should consult guidebooks and other sources whenever possible, and his site links to some of those sources.

Chris and Norcal Yak have been discussing how Dreamflows might be more useful to us “smooth water” paddlers (or weenies, as the whitewater crowd would say). Norcal Yak will look to reference Dreamflows in the future to make “smooth water” trips safer and more enjoyable.

Here’s a very basic hypothetical to demonstrate the usefulness of Dreamflows. Let’s say you want to kayak the lower American River in Sacramento, but you’re out of town and unfamiliar with the area.

Link to Dreamflows homepage and scroll down to the bottom bar to link to Xlist (cross listings).

In our hypothetical, you’ve never been to the American River, so click on the second icon, and bingo, you’ve got a satellite view of Nimbus Dam and the lower American with highways and major streets clearly marked.

Then using the icon links, check out the river flow data for recent days and weeks.

Click on the “put-in” symbol and get another aerial map view. While not specifically marked on the aerial view, this appears to be Sailor Bar, a Sacramento County park launch spot with parking. (Again, because Dreamflows pulls data with varying degrees of detail, it’s always helpful to have some additional reference material handy.)

For this particular Dreamflows entry, the “take-out” symbol shows an aerial view of the Howe Avenue Bridge, where there is another county park boat launch and parking lot.

Other public and private links provided by Dreamflows with this entry offer maps, paddling distances, ideal cfs (cubic feet per second) flow rates, and more. Check it out.